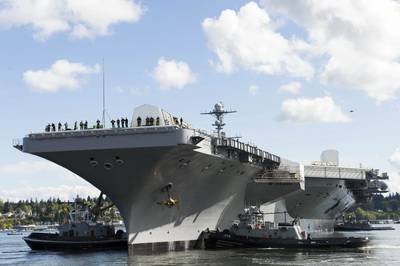 “This milestone is a big win, not just for the Stennis and PSNS & IMF team, but also for the Navy,” said Stennis’ commanding officer, Capt. Michael Wettlaufer. “I am exceptionally proud of our team’s accomplishments in achieving this major milestone early and keeping Stennis on track to return to the Fleet, as scheduled.”
To date, Stennis and PSNS & IMF personnel completed more than 11,000 critical repair jobs including the restoration of Stennis’ multi-ton propellers, shafts and rudders, as well as refurbishing all four aircraft catapults.
Stennis also began installing the Consolidated Afloat Network Enterprise Services (CANES) communications platform and is in the process of upgrading the ship’s Phalanx Close-in Weapons Systems (CIWS) to the Block 1B baseline 2 variant, designed to improve the ship’s defense against close-range threats, including surface and air targets.
“A tremendous amount of work has been accomplished by the entire project team,” said PSNS & IMF employee John Simpson, Stennis’ Project Engineer Planning Manager, from Spokane, Wash. “It took teamwork by the ship, shipyard and alteration-installation teams working to make this event happen.”
On Wednesday, millions of gallons of water entered the dry dock as Stennis and PSNS & IMF personnel conducted safety and water integrity inspections throughout the ship. Once the dry dock was fully flooded, the caisson, a barrier separating the dry dock from the bay, was removed and Stennis, with the assistance several tugboats, safely transited to an adjacent pier where the ship will continue its DPIA.
“Flooding and exiting the dry dock takes a large orchestrated effort between the ship’s crew, docking officers and other support personnel,” said PSNS & IMF’s engineering duty officer, Lt. Rebecca Wright, from Colorado Springs, Colo.
Stennis is scheduled to complete its DPIA after conducting sea trials in the fall.