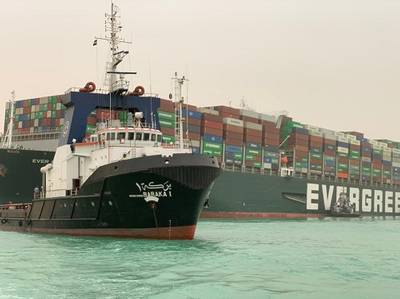 The owner and insurers of one of the world's largest container ships stuck in the Suez Canal face claims totaling millions of dollars even if the ship is refloated quickly, industry sources said on Wednesday.

The 400-metre, 224,000-tonne Ever Given ran aground on Tuesday morning after losing the ability to steer amid high winds and a dust storm, the Suez Canal Authority (SCA) said in a statement, threatening to disrupt global shipments for days.

GAC, a Dubai-based marine services company, said authorities were still working to free the ship mid-afternoon on Wednesday, and that information it had received earlier claiming the vessel was partially refloated was inaccurate.

The ship's owner, Japanese firm Shoei Kisen KK, and its insurers could face claims from the SCA for loss of revenue and from other ships whose passage has been disrupted, insurers and brokers said.

"All roads lead back to the vessel," said David Smith, head of marine at insurance broker McGill and Partners.

Container ships of this size are likely insured for hull and machinery damage of $100-140 million, insurance sources say. The ship was insured in the Japanese market, two of the sources said.

The cost of the salvage operation is also borne by the hull and machinery insurer.

"It is potentially the world's biggest ever container ship disaster without a ship going bang," one shipping lawyer, who declined to be named, said.

Martijn Schuttevaer, spokesman for Dutch marine services company Boskalis, told Reuters its subsidiary Smit Salvage had been hired to help with the operation. A team of around 10 people is heading to Egypt.

Supply chain issues
In addition, owners of the cargo on board the ship and on other ships stuck in the Canal will likely claim from the ship's liability insurer for losses to perishable goods or missed delivery deadlines, the sources said.

"If you have a constant build-up of ships, there are massive supply chain issues," said Marcus Baker, global head, marine and cargo at insurance broker Marsh.

UK P&I Club said in an emailed statement to Reuters that it was the protection and indemnity insurer for the Ever Given, but declined to comment further. This segment of insurance covers ships against pollution and injury claims.

The bulk of those insurance claims will then likely be reinsured through a program run by the wider International Group of P&I Clubs, Smith at McGill said.

At least 30 ships were blocked to the north of the Ever Given, and three to the south, local sources said. Several dozen ships could also be seen grouped around the northern and southern entrances to the canal.

Rahul Khanna, global head of marine risk consulting at Allianz Global Corporate & Specialty (AGCS), said there could also be claims for damage to the canal. Photos shared by the SCA showed a digger removing earth and rock from the bank of the canal around the ship's bow.

Groundings are the most common cause of shipping incidents in the canal, with 25 in the past 10 years, according to AGCS.

However, insurers look unlikely to face claims for spillage into the canal. Bernhard Schulte Shipmanagement, the vessel's technical management company, said there were no reports of pollution.