Throughput at Port of Hamburg Up Slightly 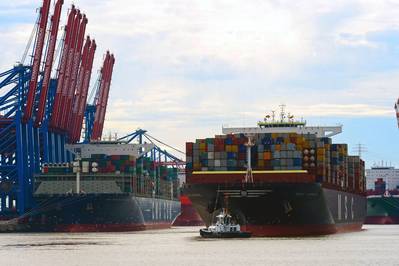 At 104.9 million tons, total seaborne cargo throughput for the first three quarters of 2016, covering general and bulk cargo segments, was up 0.3 percent on the previous year.

“Seaborne cargo throughput in the Port of Hamburg has stabilized and for the first three quarters of 2016 again increased. Seen separately, the third quarter with a 2.7 percent upturn to 34.7 million tons underlines the upwards trend. Both general and bulk cargo volumes developed positively for Germany’s largest universal port,” said Axel Mattern, Joint CEO of Port of Hamburg Marketing.

The trend for seaport-hinterland rail transport was also maintained. “By comparison with other leading European ports, in the first three quarters of 2016 Hamburg further expanded freight volumes transported by rail. Transporting 35.5 million tons of freight and 1.8 million TEU, representing gains of 3.1 percent and 1.9 percent, rail once again achieved a substantial advance,” reported Ingo Egloff, Joint CEO of Port of Marketing.

In the first nine months of the year container throughput as a whole remained almost at the previous year’s level. Whereas containerized cargo volume advanced 0.4 percent to 69.3 million tons, at 6.7 million TEU the number of boxes handled was down just 0.1 percent, or almost unchanged. The port’s container traffic with Asia grew by 1 percent. Predominating in the Port of Hamburg, container throughput with Chinese ports also thrived. This attained a 0.6 percent increase. Container services in the North & South America trades produced overall growth of 1.2 percent. In the European container trade, results differed. On the one hand, a 4.4 percent advance to 337,000 TEU in container traffic with Russia signaled a slight upward trend. On the other hand, direct calls by container liner services in Gothenburg and Gdansk caused downturns of 15.4 and 14.1 percent in seaborne container traffic with Sweden and Poland, respectively. Declining by 1.7 percent, the European trade as a whole was still slightly negative.

The port also saw a continuing rise in trade with India. With throughout 6.8 percent ahead at 188,000 TEU, the country now ranks eighth among Hamburg’s top trading partners in container traffic. Positive trends here also produced growth of 18.0 percent with Mexico, 7.7 percent with the U.S., 12.1 percent with United Arab Emirates and 13.3 percent with the U.K. “For the first three quarters of the year the Port of Hamburg’s container throughput statistics indicated 0.5 percent growth to 3.5 million TEU in import boxes. Exports reached 3.2 million TEU, remaining 0.6 percent below the previous year’s figure. Despite the increase in import containers and an overall 0.5 percent advance for loaded containers, reaching 5.7 million TEU in the first three quarters, a very slight 0.1 percent downturn occurred in the Port of Hamburg’s overall throughput figure. That is primarily attributable to fewer transhipment services with ports in Poland and Sweden,” explained Mattern.

There were various reasons for the 8.7 million tons or 14.8 percent fall in exports in the suction/liquid/grab cargo segment. Apart from the harvest-related downturn in grain exports, down by 21.9 percent or 2.7 million tons in the first half, and far weaker than in the especially strong previous year, oil product exports at 2.5 million tons were also 26.5 percent down. Poor throughput can primarily be explained by the closure of a major Hamburg refinery and cessation of its oil product exports. The grab cargo segment almost reached the figure for the comparable period of the previous year, with the total just 0.6 percent lower at 2.6 million tons.

In the first three quarters non-containerized general cargo throughput, of outsize plant elements and wheeled cargo for instance, was 9.5 percent down on the previous year at 1.2 million tons. On the import side, with the total 2.2 percent down at 419,000 tons, growing throughput figures for imports of timber, project cargo and oleaginous fruits failed to offset downturns for paper, metal and vehicles. On despatch of conventional general cargoes, reported as being 13 percent lower at 776,000 tons, growth for timber, iron and steel failed to compensate for lower vehicle exports.

Ingo Egloff and Axel Mattern, Port of Hamburg Marketing’s two joint CEOs, revealed at the port’s quarterly press conference that the universal port of Hamburg’s seaborne cargo throughput has stabilized, with an upward trend discernible. In stiff competition with the main ports of Northern Europe, Hamburg can report an outstanding trend on seaport-hinterland services. Against the general rail freight tendency for declining volumes, the quantity of freight shifted in and out of the Port of Hamburg by rail increased by 3.1 percent. The total number of containers transported by rail during the first nine months climbed by almost two percent to 1.8 million TEU.

More than 200 freight trains daily reach or leave Hamburg as Europe’s largest rail port, connecting it with all economically active inland regions. Hamburg’s very numerous connections and intense frequency of train departures are advantageous for rapid handling of export and import freight for inland shippers. “If the port is to continue to be expanded and remain competitive in its numerous functional areas, apart from the development of high-performance access and dispersal corridors for freight transport by rail, truck and inland waterway craft, dredging of the navigation channel on the Lower and Outer Elbe remains essential for enduring growth and employment,” said Ingo Egloff.

The Port of Hamburg is Germany’s largest universal port, guaranteeing more than 156,000 jobs in the Hamburg Metropolitan Region. The port is also a significant industrial location, its total added value of €21.8 billion being of immense importance for the entire German national economy. For 2016, the Port of Hamburg’s marketing organization is reckoning with total seaborne cargo throughput at last year’s level of the order of around 138 million tons and container throughput of almost 9 million TEU.