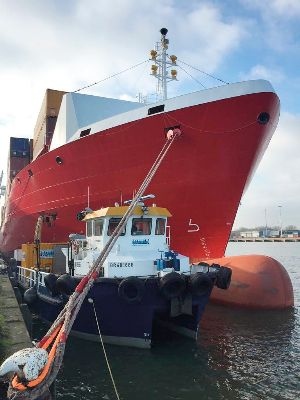 This was done during a stop in Rotterdam. The unit needed to be overhauled and the operation had to be carried out within a very short window that would fit the schedule available to the vessel’s owner.

The team mobilized to the ship’s location using a workboat loaded with all the needed equipment. These workboats are fully equipped as dive support stations with hydraulic cranes, winches, nautical and communication equipment and a dive control room. They are stationed in Antwerp and Rotterdam and can be used for a wide range of operations in Belgium, the Netherlands, the United Kingdom and France. This enables rapid deployment. It also increases flexibility, which was essential during an operation like this.

After the team set up a monitoring station, the divers started the operation with a detailed inspection of the bow thruster and tunnel. In the meantime, initial preparations were made in the bow thruster engine room for the removal of the unit so that there would be no ingress of water once it was taken out.

The next step was to secure the gearbox with hoisting equipment. The team then disconnected the unit from the engine room. They lowered it onto a sledge designed especially for such thruster operations.

Hydrex carried out the removal following the specific procedures required by the involved OEM. This allowed them to remove the thruster unit with the blades still attached, speeding up the operation.

Simultaneously the team sealed off the tunnel from the bow thruster room. Once the unit was lifted onto the quay it was prepared for transport to the workshop.

By performing the operation on-site and underwater the Hydrex divers made it possible for the owner to keep the vessel out of drydock.

The team worked in shifts around the clock. They finished the job well within the available time frame. This allowed the ship to sail on schedule, which was a key benefit for the owner.