The sound part of the vessel Maersk Honam, which was hit by a serious fire last year, is being transported to Hyundai Heavy Industries Shipyard in South Korea, where it will be rebuilt.

The sound section of Maersk Honam was successfully loaded aboard the heavy-lift vessel Xin Guan Hua on open waters outside Dubai (UAE) on Saturday, 2 February. It was expected to pass Singapore Strait on Monday, 18 February 2019. The heavy-lift vessel will deliver the 228.5-metres-long section from midship to stern at Hyundai Heavy Industries Shipyard in South Korea in March, the same yard the vessel was built in.

At the Hyundai Heavy Industries Shipyard, the sound section of Maersk Honam will be joined with a new build forward section. The former forward section is safely moored at Drydock World Dubai for continued removal of damaged containers and debris. Once cleaned, it will be recycled. In accordance with our Responsible Ship Recycling Standard (RSRS), relevant recycling options are currently being investigated and evaluated. 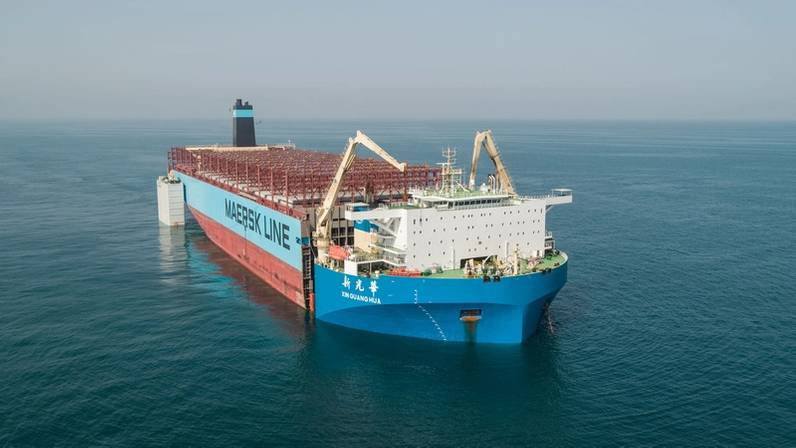 The rebuilt vessel is expected to resume service again in the second half of 2019.

On March 6, 2018, a fire broke out in a cargo hold aboard Maersk Honam while the vessel was en route from Singapore toward Suez, about 900 nautical miles southeast of Salalah, Oman. There were 27 crew members onboard, of which five died and 22 were evacuated safely
The fire continued to burn for five weeks. At the time of the incident, the ship was carrying 7,860 containers for the 2M Alliance between Maersk Line and Mediterranean Shipping Co. (MSC).

The first newbuild rigid inflatable boat (RIB) built by Dongara Marine has entered into service, heralding a raft of government…