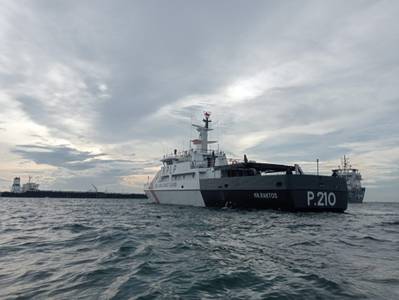 The U.S. government has allowed some transactions to take place with a sanctioned oil supertanker in efforts to free the vessel stranded in Indonesian waters, the U.S. embassy in Singapore said on Wednesday.

The Indonesian navy has been trying to free the Djibouti-registered ship, Young Yong, which ran aground off Indonesia's Riau Islands on Oct. 26 near a gas pipeline. The U.S. last week issued sanctions against an international oil smuggling network it said supports Hezbollah and Iran's elite Quds Force, targeting dozens of people, companies and tankers as Washington sought to mount pressure on Tehran.

The Young Yong was among the vessels sanctioned.

But the U.S. Office of Foreign Assets Control (OFAC) has since permitted certain transactions necessary to dock and anchor the Young Yong safely and to preserve the safety of the crew, the embassy told Reuters in an email.

The OFAC has also allowed for emergency repairs at the ship and measures taken to protect the environment, the mission added. Capable of carrying 2 million barrels of crude oil, the stranded tanker is almost full, according to shipping data on Refinitiv Eikon.

No injuries or leaks have been reported. "At this time, the (U.S. government's) highest priority is minimizing the environmental and energy impact of this incident," the embassy said. "However, OFAC has not authorized the offloading of cargo."

Indonesian authorities told Reuters on Monday that it could take up to a month to free the ship as it ran aground in the Singapore Strait near a key pipeline that supplies natural gas to Singapore.

The tanker typically loads crude oil bound for China from floating storage at the Singapore-Malaysia Straits.

Shaun Leong, a partner at law firm Withers KhattarWong, said U.S. authorities would want to be closely involved in all aspects of the handling of the supertanker because the ship may carry evidence on traffic data and navigational history, which could be used to prove allegations around the supertanker's involvement in the international oil smuggling network

. "Care would have to be taken to ensure that such material are not lost in the recovery of the ship," he said.