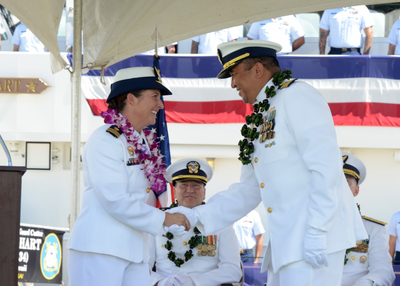 “There is no greater reflection of the commandant’s strategic vision and commitment than the fact that as we commission the William Hart today, it will be the fifth Coast Guard cutter commissioned in the last two years here at Base Honolulu that will operate in the heart of Oceania,” said Rear Adm. Kevin Lunday, commander Coast Guard 14th District. “There is no question that by our actions and not our words alone, the Coast Guard is here and committed along with the rest of the United States in the Pacific.”

The Coast Guard Cutter William Hart (WPC 1134) is the third Sentinel-Class FRC to be homeported at Coast Guard Base Honolulu. While these ships' crews call Honolulu home, they will operate throughout the 14th Coast Guard District, which covers more than 14 million square miles of land and sea, with units in Hawaii, American Samoa, Saipan, Guam, Singapore, and Japan.

The FRCs are some of the newest Coast Guard vessels to come on-line, replacing the aging Island-Class patrol boat fleet. The FRCs represent the Coast Guard's commitment to modernizing service assets to address the increasingly complex global Maritime Transportation System.

“This is a remarkable ship with increased seakeeping, endurance, range, combat capability, telecommunications, everything about this is a game-changer for the Coast Guard,” said Lunday.

FRCs feature advanced systems as well as over-the-horizon response boat deployment capability and improved habitability for the crew. The ships can accommodate a team of 24, reach speeds of 28 knots with a range of 2,500 nautical miles, and patrol up to five days. Recently, the FRCs already stationed in Honolulu participated in longer over-the-horizon voyages to the Republic of the Marshall Islands and Samoa displaying the potential of these cutters and their importance to the Coast Guard's overall Pacific strategy and regional partnerships.

The crew took delivery of the William Hart, which was built by Bollinger Shipyards in Lockport, Louisiana, in Key West, Florida, and arrived in Honolulu on Aug. 17. Three more FRCs are scheduled to be homeported in Guam, increasing the 14th Coast Guard District's total number of FRCs to six. Service-wide, the Coast Guard is currently acquiring 56 FRCs to replace the 110-foot Island-class patrol boats.

William C. Hart, the cutter's namesake, was a Gold Lifesaving Medal recipient who rescued a crewmember of the tug Thomas Tracy. In November 1926, Hart dove into the water in a 70-mph gale off Absecon, New Jersey, to save the mariner who went overboard in the storm. Throughout the '30s, Hart served in the U.S. Army Corps of Engineers before returning to the Coast Guard in 1939, advancing to the rank of chief petty officer and serving as a boatswain's mate. When the United States entered World War II, Hart was commissioned as a lieutenant junior grade and saw action in both the Atlantic and Pacific theaters. He served as commanding officer and executive officer for several ships before retiring from the Coast Guard as a lieutenant commander in 1950.