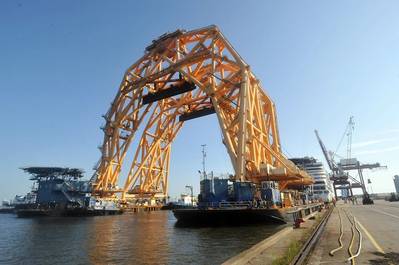 VB-10,000 uses its dynamic positioning system to maneuver into its mooring at the Port of Fernandina, Fla., July 3 (U.S. Coast Guard photo by John D. Miller)

The twin-hull heavy lift vessel VB-10,000 moored at the Port of Fernandina, Fla., July 3, 2020, for final modifications and function checks prior to heading to St. Simons Sound in early to mid-July. The two 255-foot tall gantries will use lengths of chain to cut the capsized RoRo vessel Golden Ray into eight pieces and lift them onto barges for eventual transportation to Louisiana for recycling.

Golden Ray, a Korean-owned roll-on, roll-off vessel that ran aground and overturned near the Port of Brunswick in Georgia in September, will need to be dismantled in place and removed in pieces because the vessel, in its current position and condition, is not able to support the stress exerted on the hull and keel during parbuckling operations. Salvors have installed 16 lifting lugs on the wreck to provide connection points for the VB-10,000 lifting operations.

While in Port of Fernandina, workers will make final modifications to the rigging beams on the VB-10,000's gantries and conduct function checks prior to heading to St. Simons Sound.

The configuration of the rigging beams underneath the top of the gantries will be modified to lift pieces of the Golden Ray’s hull from St. Simons Sound after winches on the sides of the forward gantry separate them from the capsized ship using 400-foot lengths of chain.

The Marshall-Islands-flagged car carrier Golden Ray has been aground on its side outside the nation's second largest car carrier port since it capsized shortly after leaving the Port of Brunswick en route to Baltimore on September 8. The cause of the incident is under investigation.