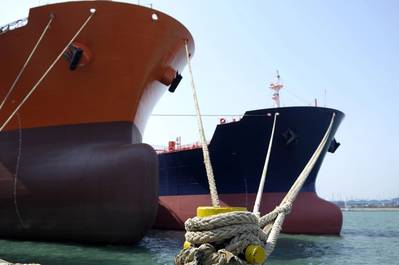 During the first seven months of 2021, only three actively trading Very Large Crude Carriers (VLCCs) have been sold for demolition. The current market for seaborne transportation of crude oil is weak and has caused freight rates to drop to multi-year lows. Despite this, crude oil tanker shipowners are not seizing the opportunity to reduce capacity and send less efficient units to the demolition yards.

The subdued demolition activity is seen at a time when steel prices offered in Bangladesh, India, and Pakistan – the world’s top ship demolition locations – are at an all-time high. The price of steel from ship demolition is supported by high steel prices in general as well as the limited number of ships heading for demolition.

In addition to the three actively trading VLCCs demolished in the first seven months of the year, five retired VLCCs working as Floating Storage and Offloading units (FSOs) in recent years have been demolished. 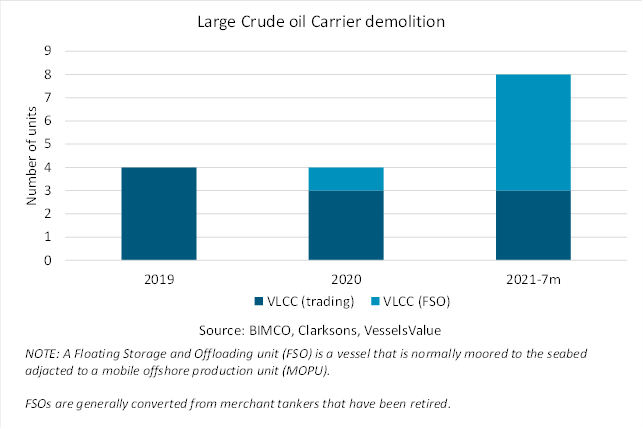 Owners take advantage of an attractive secondhand market
The lethargic pace of VLCC demolition is also explained by attractive prices for older ships in the secondhand market. According to VesselsValue, 69 VLCCs have changed hands in the Jan-July 2021 period, compared with 91 for the full year of 2020.

To some extent, what we see now is like what we saw in the period that followed the six quarters of high oil tanker earnings from Q4 2014 through Q1 2016. Following this it was not until Q3 2017 that we began to see a pick-up in demolition for VLCCs.

Time has proven that it takes time for shipowners’ demolition decision to mature, and that a weak market right in the wake of a strong one is not enough to take the final step and go for demolition.

“The low demolition level seen in the first seven months of the year for crude oil tankers surely takes some by surprise. Some are wondering why shipowners are not demolishing the excess fleet when freight rates have been sluggish for the past year,” said Peter Sand, BIMCO’s Chief Shipping Analyst. “The reason behind this is two-fold. First, the strong earnings enjoyed by everyone in the crude oil tanker shipping sector last year leaves no owner short of cash. Second, as secondhand prices exceed even the record-high prices offered for demolition steel, shipowners are more inclined to keep their tankers afloat and changing hands, rather than sending them to the demolition yards,” said Sand, adding: “Yet, nothing is straightforward as oil product tankers, on the other hand are heading for a record-high level of fleet demolition in 2021.”