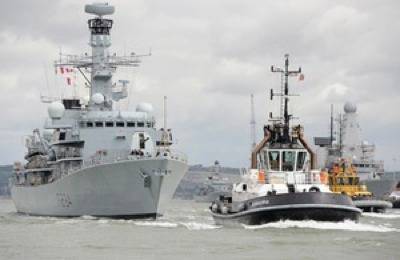 Portsmouth-based 'HMS Iron Duke' has returned to sea after a 16-month upgrade and now boasts one of the world's most advanced radar systems.

As part of a £100 million programme, Artisan (advanced radar, target indication, situational awareness and navigation) will be fitted to all the Navy’s 13 Type 23s as well as the 2 future aircraft carriers. The Type 23’s replacement, the Type 26 Global Combat Ship , may also carry the system when it enters service next decade.

Artisan boasts some impressive statistics. It can spot something as small as a cricket or tennis ball travelling at 3 times the speed of sound more than 25 kilometres away. Built from the same lightweight carbon glass fibre materials found on a Formula 1 racing car, Artisan weighs just 700 kilograms.

The system can track up to 800 moving targets simultaneously, whether they are 200 metres or 200 kilometres away from the ship. Using Artisan, Iron Duke could sit in her home base, in Portsmouth, and simultaneously follow aircraft flying into Heathrow, Gatwick, Southampton, Stansted, Bournemouth, Bristol, Cardiff, Exeter and Birmingham airports.

With advanced anti-jamming features, Artisan is not affected by interference from 10,000 mobile phone signals, and can pick out targets against a background of electronic noise and interference.

Iron Duke’s upgrade, carried out by BAE Systems in Portsmouth, also included work on her other weapons systems and combat computer. In addition, improvements to her ventilation mean she is able to operate more efficiently in hot climates.