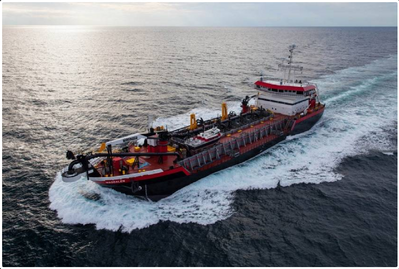 The new dredge RB Weeks will be a sister ship to the Eastern-built TSHD Magdalen (pictured), which entered service for Weeks Marine in 2018 (Photo: Weeks Marine)

Dredging contractor Weeks Marine has ordered a new trailer suction hopper dredger from Eastern Shipbuilding Group, to be delivered in the first quarter of 2023.

The new dredge, RB Weeks, to be constructed at Eastern's Allanton shipyard in Panama City, Fla. will be a sister ship to the Eastern-built twin screw TSHD Magdalen placed into service in 2018. The RB Weeks is named after the co-founder of the company and the husband of Magdalen Weeks.

The shipbuilding order, signed on April 16, 2020, adds to billions of dollars in capital investments made recently by the U.S. dredging industry, said industry group Dredging Contractors of America.

“This is the third major capital construction shipbuilding project in as many years for Weeks Marine. It reflects Weeks Marine’s commitment to building dredges to serve the needs of the United States of America,” said William P. Doyle, Chief Executive Officer of the Dredging Contractors of America.

RB Weeks is also the third large scale hopper dredge over the past five years that Eastern has built and is constructing.