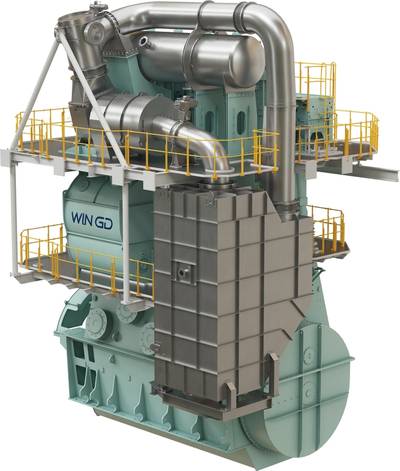 WinGD’s X72DF-2.1 engines will power 25 vessels as part of the QatarEnergy’s North Field East (NFE) project. The 50 dual-fuel engines feature the new on-engine configuration of WinGD’s intelligent control by exhaust recycling (iCER) was released in May 2022, designed to provide improved fuel efficiency in both gas and diesel modes and a 50% reduction in methane slip compared to the first-generation X-DF.

One order as part of the Qatar NFE programme is for two 174,000-cbm LNG carriers to be built for TMS Cardiff Gas at Korean shipyard Daewoo Shipbuilding & Marine Engineering (DSME). The two vessels will be the first ships built by DSME to feature on-engine iCER.

QatarEnergy has secured approximately 60% of the global LNG shipbuilding capacity through 2027 to cater for its growing LNG carrier fleet requirements, which could reach more than 100 new vessels. A wide range of ship owners have tendered to build gas carriers that will be operated under long-term charters to QatarEnergy. The vessels will be delivered between 2023 and 2027.

WinGD’s X72DF engine has become the standard for LNG carriers, with 224 in service and more than 130 engines on order.