Winter Work on the Great Lakes 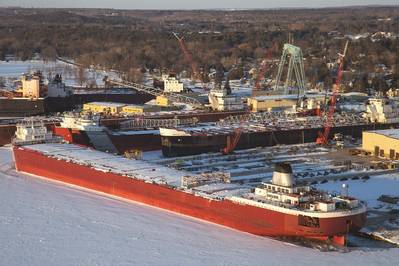 Along the 1,600-mile, ice gray arch of the St Lawrence Seaway, the 2020 Great Lakes commercial shipping season will lurch back to life on March 25 when the Soo Locks at Sault Ste. Marie, Mich. reopen.

The ceremonial opening signals a passage with passable ice and the 114th Great Lakes season for its fleet of 45 venerable lakers. Most of these huge self-loading freight haulers are at least 50 years old, rust free, and fit; American steel sailing on a freshwater sea.

To handle Great Lakes cargo, a special type of vessel has evolved: the North American "laker", the largest being more than 1,000 feet long, capable of carrying up to 70,000 tons of iron ore or 1,700,00 bushels of grain in one trip.[Interlake Steamship Company’s Paul R. Tregurtha, christened in 1981, is the largest laker sailing the Great Lakes.

Thanks to a career spent primarily in freshwater, the average life expectancy of a Laker is 40-50 years, compared to about half that for saltwater vessels. Downtime during winter lay-up allows ample opportunity for maintenance, another key factor in a laker's long lifespan, according to Eric Peace, director of operations and communications for the Lake Carrier Association (LCA).

The majority of lakers are self-unloaders, able to discharge cargo without dockside equipment. Many such vessels that once carried only ore pellets, stone or coal have been modified to carry grain, salt or even fertilizer. Others carry cement and petroleum products.

Lakers’ self-unloading capability is unique, and the equipment requires maintenance to ensure the vessels can continue to unload up to 75,000 tons of cargo in less than 12 hours, one of the reasons why U.S.-flag Lakers are the most efficient mode of dry-bulk cargo transportation in the world, Peace said. 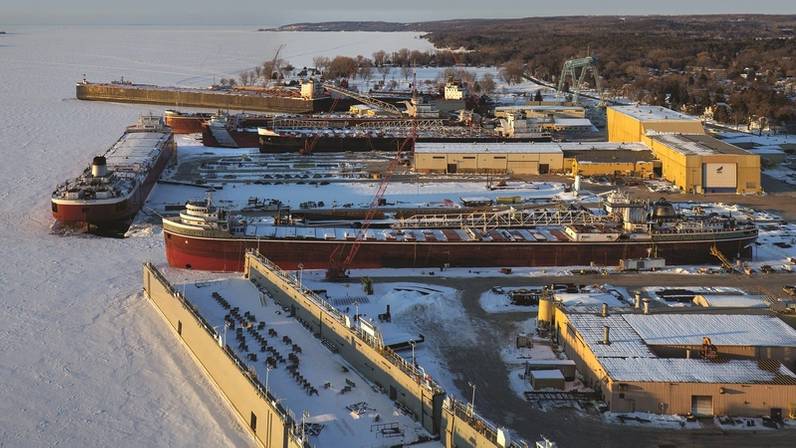 Winter work
Peace is making an educated guess, but he figures more than $97 million in maintenance and modernization work was done on U.S.-flag Lakers for the 2019-2020 winter season at multiple Great Lakes shipyards.

The biggest part of it is winter work, which includes, steel renewal, installation of advanced electronic navigation systems, and replacement of safety equipment such as lifeboats.

More than one-thousand engineers, welders, pipe-fitters, mechanics and electricians have worked tirelessly on the ships to ensure they are ready to sail as soon as the Soo Locks open on March 25, according to Peace.

Major shipyards are located in Duluth, Superior and Sturgeon Bay, Wis. as well as Erie, Penn., with other work being done in Toledo and Ashtabula, Ohio; Ludington, Mich.; Detroit and Milwaukee.

Virtually all the great lakes lakers that fly Canadian flags winter in Ontario and Hamilton. 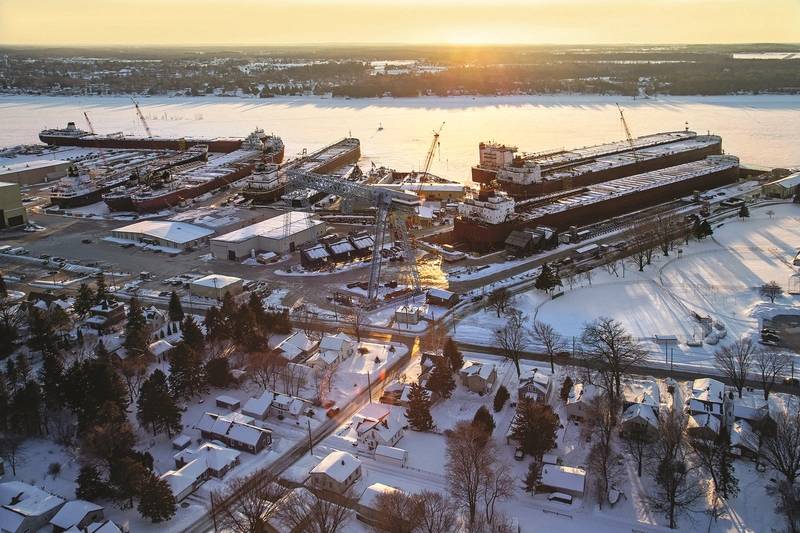 “We provide full-service maintenance and repair – everything from engine overhauls to mechanical and electrical repairs; hull and propulsion repairs; surveying and inspection needs; repowerings, retrofits and conversion services and more.

“We do 60 to 70% of our repair work during the winter months. But there is a flow all year long, as our repair business has steadily grown. Ship repair in total is about 30 to 40% of our business.

“We service vessels that require conveyor system and boom belt work. We also blast and paint cargo holds and ship’s hull structure. We do any emergency repairs needed; not just during winter but year-round. Our floating drydock and 1,154 foot graving dock help us accommodate many of the largest Great Lakes vessels in operation.”

American flag vessels have been ordered to operate since January 1, 2015, in compliance within the North American Emissions Control Area (essentially all U.S. and Canadian fresh and saltwater coasts). The sulfur content of vessel fuel must be no more than 0.1% by weight, a substantial reduction from the 1% allowed in 2010. So, this is a pressing need.

“We can install closed-loop, open-loop and hybrid systems. We transform ships to make them scrubber-ready by providing extensive structural, piping and electrical modifications and can minimize downtime by accomplishing this during the winter layup,” Koch said.

“FBS has also completed 14 engine repowerings which are more energy and emission efficient, ranging from 1,000-foot vessels to passenger ferries and tugs. Both of these services have been trends over the last several years,” Koch said. “For the last 10 years, we’ve also provided electrical retrofits of original deck winches to new, user-friendly operations.” 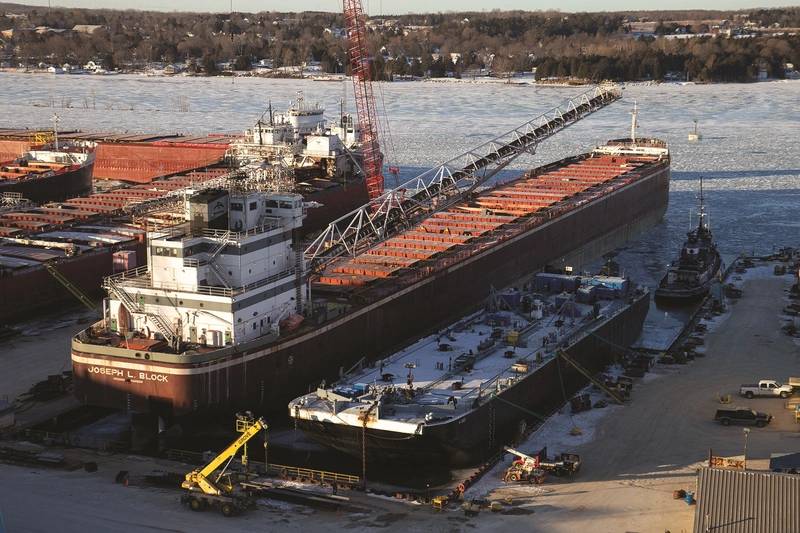 100-year-old tugs
Such long and unwieldy lakers on the often-narrow pathways of the Great Lakes waterways demand a fleet of skilled tugs.

“Many of our tugs are around a hundred years old,” she said with remarkable calm. “We change out the engines at about every 40 years. The last one was back in the ’70s.”

“It is pretty wild,” Buccigrossi said. “But operating in fresh water, we have no issue with salt corrosion on the steel. And they are all good U.S. steel.”

She said federal regulations finally made it cheaper to build new tugs and retire the 100-year-olds. “We are building about one new tug a year at our Great Lakes Shipyard.”

“For winter work on lakers, typical service/maintenance includes routine inspections, steel reinforcement, etc. In addition, we provide a wide variety of services on other vessels that are not lakers (i.e., research vessels, ferries, fireboats, tugs, barges, etc). These services include five-year regulatory inspections, repowering, coatings, electrical installation, everything. And we operate a new 770-ton Marine Travelift, the largest in the Great Lakes, she said.

“With the implementation of Subchapter M, we have seen a few tugboats in looking for some additional work to be compliant with the new regulations.

“Appropriation of federal funding over the last couple of years has increased the work items on government vessels, such as research vessels, USCG cutters and barges, USACE (Corps of Engineers) tugs and barges, all of which can be handled by the Marine Travelift,” Buccigrossi said. 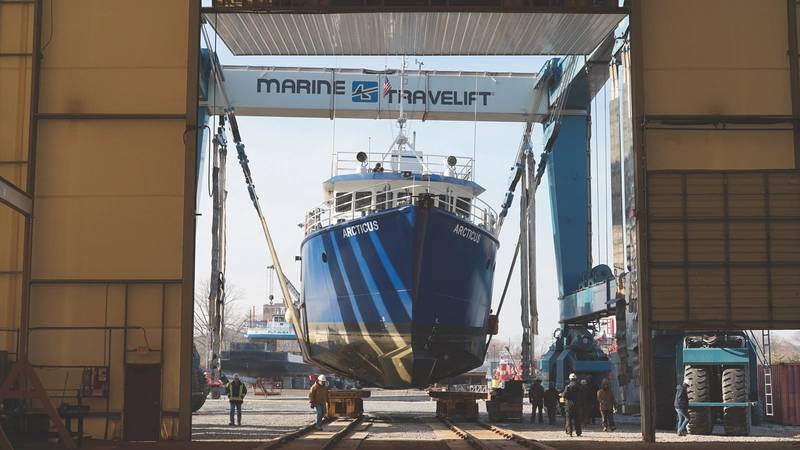 The Baltic Exchange's main sea freight index dipped on Wednesday, pressured by lower rates for the capesize and panamax vessel…