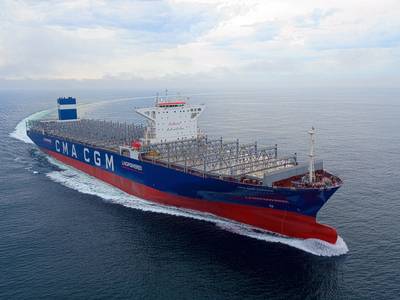 The LNG-powered, 14,800 twenty-foot equivalent unit (TEU) capacity CMA CGM Tenere is one of six containerships in a series being built for EPS by Hyundai Samho, a unit of shipbuilding giant Korea Shipbuilding & Offshore Engineering Co.

The 366-meter-long vessels were ordered by EPS in April 2018 and will be delivered by the third quarter of 2022. They will be chartered by French container shipping company CMA CGM.

CMA CGM will soon take delivery of even larger LNG-powered containerships, stating with the 400-meter-long, 23,000-TEU capacity CMA CGM Jacques Saadé from Shanghai Jiangnan-Changxing Shipyard. The Chinese shipyard is building nine vessels in the series for CMA CGM, who aims to operate at least 20 LNG-fueled containerships by 2022.

Increasingly, shipowners in various segments—from bulk carriers to cruise ships—are looking to LNG-powered vessels to meet the International Maritime Organization's (IMO) environmental regulations that call for ship emissions to be reduced by more than 30% by 2025 from 2008 levels. The IMO rules also target 40% emissions reductions by 2030 and by 70% reductions by 2050.

In addition, the IMO regulations that took effect at the start of this year lowered the sulfur cap on bunker fuel content from 3.5% to 0.5%.

The number of LNG-fueled ships is expected to more than double from less than 400 currently to more than 1,000 by 2030, a senior executive at Malaysia's Petronas said on Wednesday.