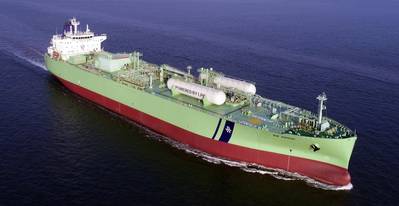 Earlier this year, the main engine aboard the 2015-built BW Gemini was retrofitted from a MAN B&W 6G60ME-C9.2 type to a MAN B&W 6G60ME- LGIP dual-fuel type capable of operating on both LPG and traditional fuel oil. The ship was also equipped with Wärtsilä’s LPG fuel supply system. Wärtsilä said its scope of work included the system engineering, the ship design for the conversion project, two 930 m3 fuel tanks with the pumps and fuel system, the pump skids and the cargo handling system. The retrofit took place at Yiu Lian Dockyard in Shenzhen, China.

The use of LPG as fuel reduces emissions of sulphur oxides (SOx) by some 97%, and is viewed as being an important step towards the decarbonization of shipping.

“LPG is powering this vessel while protecting the environment, and we look forward to demonstrating its benefits to the industry as shipping prepares for a future with zero-carbon propulsion,” said Pontus Berg, BW LPG Executive Vice President, Technical and Operation.

Now equipped with a main engine engine capable of running on LPG and switching to traditional fuel seamlessly, the vessel will sail on full LPG propulsion across the Pacific Ocean in another historic first, to Enterprise Port in Houston, Texas, for loading. Her voyage is expected to produce 20% less greenhouse gas emissions compared to compliant fuels, and use 10% less fuel, demonstrating the benefits of LPG propulsion to the industry.

The 225-meter-long, 84,134-cubic-meter-capacity BW Gemini is the first of several BW LPG carriers to be retrofitted for LPG propulsion. The shipowener, part of the BW Group, has committed to retrofitting at least 12 of its VLGCs with dual-fuel LPG engines through 2020 and 2021. The vessels slated to be converted include BW Leo, BW Libra, BW Orion, BW Balder, BW Njord, BW Var, BW Tucana, BW Brage, BW Volans, BW Freyja and BW Frigg.

“On behalf of the Management of BW LPG, we thank our BW team on site and in office, and partners such as MAN ES, Wartsila Gas Solutions, DNV-GL, Isle of Man flag and You Lian Shekou dockyard. BW Gemini is a testament to what industry collaboration can achieve – together, we can pioneer the technology needed to decarbonize shipping and realize a zero-carbon future,” Berg said.

Cristina Saenz de Santa Maria, Regional Manager for South East Asia, Pacific & India at DNV GL Maritime, “With the pioneering conversion to LPG, BW LPG is demonstrating that not only can shipowners step up to cut their emissions in operation, but that the conversion itself can play a role in reducing the industry’s overall environmental impact. We hope more owners will look to these kinds of new fuels as the industry moves to decarbonize and DNV GL stands ready to support the industry with our unmatched technical expertise and unique classification solutions.”

“World firsts are always exciting and we congratulate BW LPG on their commitment to pursuing the adoption of LPG as a long-term viable and sustainable marine fuel,” said Kjell Ove Ulstein, Director of Sales and Marketing at Wärtsilä.