Vessel Aground Blocks Traffic to Port of Antwerp 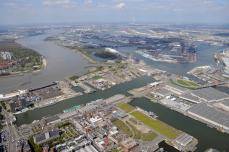 Traffic for large ships heading towards the Belgian port of Antwerp was temporarily blocked on Friday after a giant container ship ran aground outside the Dutch port of Terneuzen downstream from the Belgian harbour, emergency services said.

Emergeny services for the Dutch province Zeeland said on their website the MSC Rachelle had run on to a sandbank on its way to Antwerp, though they later said it had been refloated.

High tide was due at 1700 GMT and six tugs had been involved in the effort to refloat the vessel, authorities said, adding that the shipping restrictions would be lifted in the afternoon.

The Dutch port lies on the south side of the mouth of the River Schelde which links Antwerp, by some measures Europe's second-largest port, to the sea.

The 101,000 tonne, 334 metre long MSC Rachelle, owned by the Mediterranean Shipping Co, was heading from the Spanish port of Valencia when it ran aground, according to Thomson Reuters Eikon data.