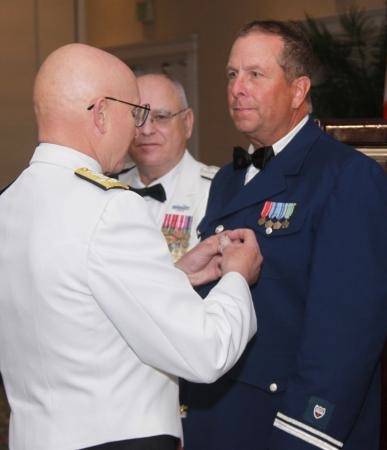 Chris Bandy, a Coast Guard auxiliarist in Bayfield, Wis., was recognized as the 2012 Coast Guard 'Auxiliarist of the Year' at a recent ceremony held in San Diego, Calif.

Bandy enrolled in the Coast Guard Auxiliary in June 2010 and quickly earned the reputation as an enthusiastic volunteer, subject matter expert, and Paddle Smart Program manager in the Apostle Island National Lakeshore area of Lake Superior.

The Paddle Smart Program was launched in 2011 to curb the rising number of kayaking fatalities. It was significantly promoted and championed by Bandy who devoted over 700 hours working alongside the National Park Service, the U.S. Coast Guard, and local kayak outfitters to increase kayaking safety awareness.

He coordinated underway professional exchanges with National Park Service units, and executed an exceptional kayak search and rescue exercise that involved several federal and local response agencies along with nearly all local kayak organizations. Bandy personally distributed over 700 kayak emergency contact decals and spearheaded public education and outreach to more than 3,000 kayaking enthusiasts in the region.

His dedication and commitment to strengthening partnerships and advancing paddler safety were instrumental to the prevention of fatalities and the lowest number of Coast Guard paddle sport-related search and rescue cases within the Apostle Island National Lakeshore area in more than four years.

He selflessly devoted more than 1,300 hours of service to the advancement of recreational boating safety and the professional development of others. During his Auxiliary tenure, Bandy was awarded the Auxiliary Achievement Medal, two Coast Guard Meritorious Team Commendations, and the Sustained Auxiliary Service Award.

The U.S. Coast's training barque is gearing up to begin summer training for more than 130 Coast Guard Academy cadets.At 295 feet in length…