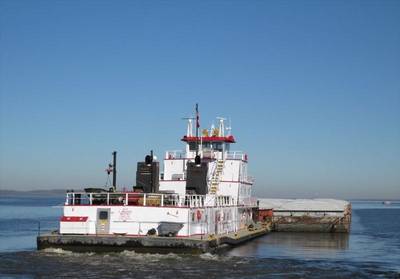 More than 700 barges are delayed on the lower Mississippi River on Thursday after a structural crack in the Hernando de Soto Bridge prompted the U.S. Coast Guard to halt vessel traffic on a portion of the crucial trade artery.

The Coast Guard restricted all vessel traffic between mile markers 736 and 737 on the Mississippi River near Memphis after the Arkansas Department of Transportation (ARDOT) discovered a large crack in a steel support beam on the bridge carrying I-40 over the Mississippi River from Memphis, Tenn., to West Memphis, Ark.

The number of vessels and barges waiting to transit in either direction rose from 16 and 229 on Wednesday afternoon to 44 vessels and 709 barges and counting by Thursday morning, according to the Coast Guard. The barges are carrying a mix of wet and dry cargoes including crude oil, grains and rocks.

It remains unknown when the waterway might reopen as officials await the results of a more thorough inspection to asses the full extent of the bridge damage. The bridge has also been blocked off to vehicle traffic.

Meanwhile, inspectors seek to determine whether the bridge can hold its own weight and the weight of repair crews. Authorities said engineers must confirm that the bridge can stand on its own for marine traffic to resume, and that the vessel stoppage could last days or weeks.

The impact of any prolonged delay would be significant. Barges that are loaded along the upper Mississippi, Ohio, Illinois or Missouri rivers must pass underneath the bridge to reach Gulf of Mexico export facilities near New Orleans.

An ailing crewmember was medevaced from a towboat Friday afternoon, approximately seven miles south of Pascagoula, Miss., the U.S.