Fincantieri Building Up Ahead of Constellation Frigate Builds 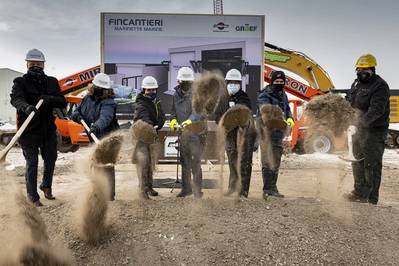 The multimillion dollar building is part of the company’s most recent $200 million shipyard capital expansion underway to support construction of the U.S. Navy's newest class of ships.

Fincantieri Marinette Marine was awarded the contract in April 2020 to design and build the first Constellation-class guided missile frigate, with options for up to nine additional ships. The total value of the contract, if all options are exercised by the Navy, is $5.5 billion.

“Building 34 is a key element to our Constellation-class frigate production,” said Dario Deste, President and CEO of Fincantieri Marine Group. “This will allow us to complete construction of two 500-foot ships at the same time inside of a massive climate-controlled facility.”

In addition to the new building, several other projects are currently underway in Marinette as part of the buildup. The largest ship lift in the U.S. is being built along the waterfront, as well as improvements to other buildings to facilitate upcoming frigate fabrication for the U.S. Navy.

Across the bay at Marinette’s sister shipyard, Fincantieri Bay Shipbuilding, construction began on several new buildings months ago and is progressing rapidly, the company said. Large portions of the frigate’s hull will be constructed in these buildings before being shipped to Marinette where they will be joined together inside of Building 34 as the ships are erected.

“We are increasing the capabilities and capacity of our system-of-shipyards here in Wisconsin to support the U.S. Navy and future customers,” Deste added.

The growing Marinette shipyard employs thousands of full-time workers and related contractors who produce Navy ships, like the Littoral Combat Ship and the newest guided-missile frigate.

“We are improving our facilities, but also adding to our workforce, with engineers, project managers, and nearly every skilled trade,” said Deste. “We are increasing our technical training pipeline, with solid partners like Northeast Wisconsin Technical College.”

Groundbreaking attendees included representatives from FMM, FMG, the U.S. Navy, the Wisconsin-based construction and engineering companies, Miron and Graef, who are building the structure, as well as union leadership of the Boilermakers 696.

Although they preferred to have an all-hands groundbreaking with the entire shipyard and local community, the leaders agreed that during the COVID-19 pandemic they would need to keep the event small.

“Locally we wanted to celebrate our continued progress with a relatively small, socially-distanced ceremony,” said Jan Allman, Fincantieri Marinette Marine’s CEO. “We have a great shipyard, filled with tremendous men and women, supported by leaders who understand that tomorrow’s Navy and our regional economy will be positively impacted by the important work here in Marinette for decades to come.”

Thai Navy Scrambles to Save Cats from Sinking Ship