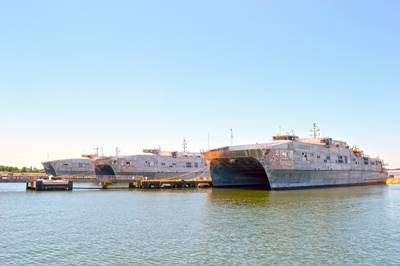 Military Sealift Command (MSC) has awarded Fincantieri Marine Systems N.A. (FMSNA) an IDIQ contract to support the maintenance of the Ship Service Diesel Generators (SSDG) on the Expeditionary Fast Transport Vessels (EPF). The current contract is for a base year plus four option years, and should the options be exercised, will run through October of 2025.

The Expeditionary Fast Transport Fleet consists of high-speed, shallow draft vessels intended for rapid intratheater transport of medium-sized cargo payloads. The EPF will reach speeds of 35–45 knots and will allow for the rapid transit and deployment of conventional or special forces as well as equipment and supplies. Currently, EPF vessels are stationed throughout the U.S. and around the globe.

FMSNA Vice President and General Manager Rick Dinsmore said, “This award is similar to a previously completed FMSNA contract for MSC; the first ran from 2014-2019. This new award and four option years is valued at up to $46 million.”