Will High-Speed Container Transport Ever Work?

Every few years I am handed a high-speed container transport proposal. Generally it consists of some type of high speed vessel design that would be able to move containers at high speed and thereby attract a new market by taking a chunk out of the air cargo market and the premium ocean market. Occasionally we are asked to look at the economics for potential investors, and it always falls short of being economically viable. While it is possible to move containers a little quicker over the ocean with faster vessels, from the customer’s point of view, the only thing that counts is faster door to door service. Therefore, when offering a faster service, the cargo needs to be sped up through the entire chain, or the sea transport leg needs to be a lot faster.

There are only two ways to make ships faster; make them bigger to take advantage of Froude number effects or install bigger engines and burn more fuel. Neither tends to work in boutique high speed container transport systems.

There is a third way and that is being spearheaded by China in the form of the New Silk Road. Here the physical efficiency of railroads, and its higher speed and shorter route, intends to deliver cargo faster between China and Europe. The new silk road will be a fascinating development to watch. It could well affect large volume cargo movement between China and Europe, but it will be highly unlikely to take over the entire China Europe maritime trade. Moreover, it can never touch the Pacific or Transatlantic trade.

But there is another technology that may provide an interesting approach to filling the middle speed slot.

Figure 1 is the Gabrielli von Karman plot (GvK plot) it was developed in the 1950’s and provided a very interesting insight into transportation efficiencies. It is not necessary to go into the mathematics, but if a technology finds itself lowest on the plot for a certain speed range it tends to be most efficient. 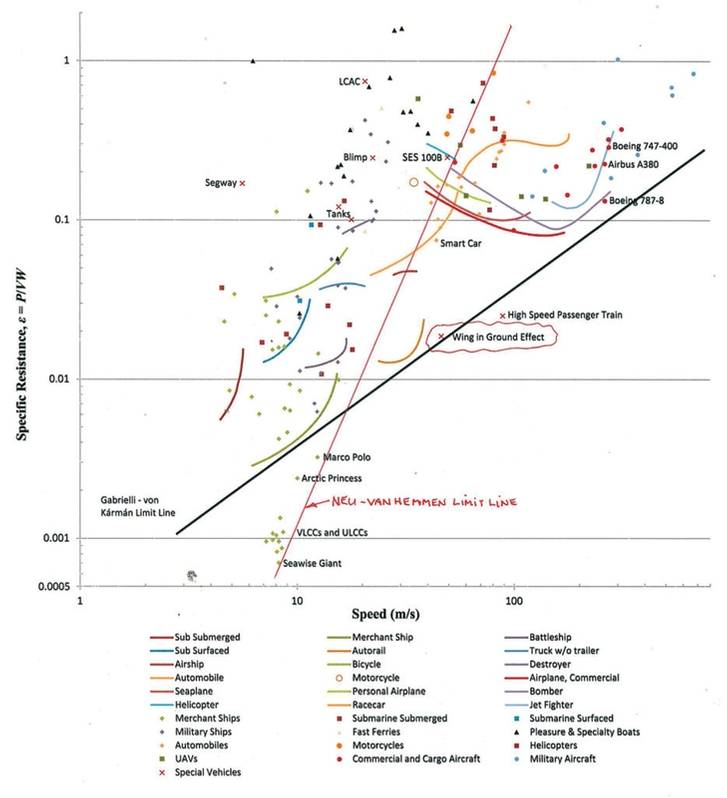 Figure 1 is the Gabrielli von Karman plot (GvK plot) it was developed in the 1950’s and provided a very interesting insight into transportation efficiencies. It is not necessary to go into the mathematics, but if a technology finds itself lowest on the plot for a certain speed range it tends to be most efficient. Image credit: Martin & Ottaway, Inc.

This plot was updated a number of years ago by Dr. Neu at Virginia Tech as a student project and populated with more modern technology and shows that we have made a little headway with regard to ships (mostly by making them bigger) and airplanes (mostly by increasing their efficiencies).That update of the graph resulted in an interesting observation by Dr. Neu and me. If you draw a line along the waterborne modes of transport only, there is another line that shows the limits on waterborne transportation technology. I modestly have called that line the Neu van Hemmen line (The NvH line). It shows that, if you operate on the water, you can go faster, but you cannot beat efficiencies of other higher speed modes of transportation.

Meanwhile, for high speed container transport we do not need to go as fast as airplanes, but want to be a lot faster than most boats, and here the Gabrielli von Karman line provides an interesting suggestion. On the plot there are two middle speed outliers. High speed train, and something called Wing In Ground effect. It is often abbreviated as WIG or Wing In Surface Effect Ship (WISES). These vessels are essentially amphibious aircraft that only operate near the surface in ground effect. Under the law and regulations they are considered to be ships, but I would call them airplanes that can’t fly that high. They fly no higher than about one half the wingspan (which makes them capable of flying over all types of sea states). During the cold war, the Soviets made a significant investment in this concept, but it stalled during Glasnost. Interestingly, new technologies such as composites, digital flight control, and much better engines, could move this concept ahead the same way catamarans sailing vessels have exploded in performance since the Eighties.  WISES are more efficient, but slower, than airplanes and that provides an opportunity for high speed container transport.

Figure 2 is a first pass sketch of what it may look like (I already see various areas for improvement on this sketch, but for illustrative purposes it will do).

The engineering behind it would result in a full length technical paper, but let me start with an interesting scaling issue that occasionally occurs in ship (or airplane design). If you make the wing (or a trimaran crossbeam) big enough, you get tons of deck space and useable volume. So here I sized the wing to fit containers and scaled the WISES from that point. Since I am not being paid to do the engineering, don’t for a second think the numbers are correct, but the concept is worth a second look.

What you get is an interesting vessel. It will operate in the 100+ knot range, and might just be able to sufficiently increase door to door delivery time on certain routes to be worth its while. 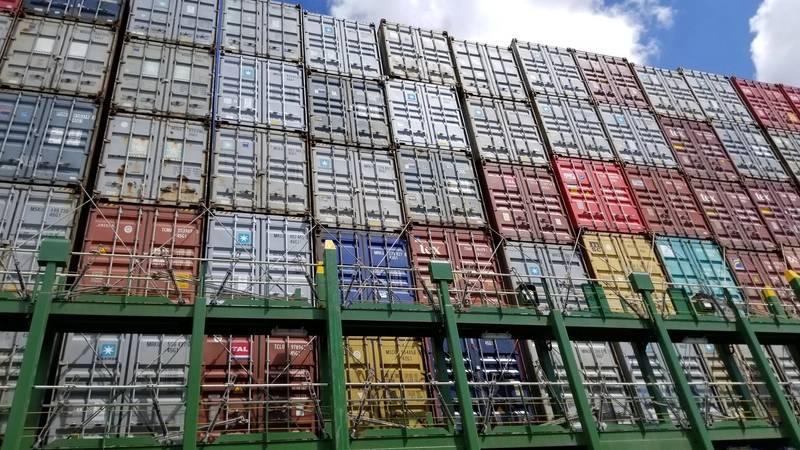 What I really like is that it also shows some interesting operational features. If you fit the containers in the wing, the structural design is actually optimized, since most of the cargo is fitted in the component that provides the lift. (In aerospace that is called spanwise wingloading). Once you fit the containers in the wing, the fuselage is only needed for floatation and RO/RO space in the fuselage comes for free. As such, it becomes a pretty decent combi carrier and could really take advantage of things like high value rolling stock or high value lifestock transport.

WISES may be the only solution to higher speed ocean transport. While further study may indicate that it has a fatal pitfall feature (such as not being economically viable or not sufficiently environmentally sustainable), it also shows that, if you start with a concept that has realistic physical potential, you have a better chance at succeeding. While speeding up conventional ships may not bring home the bacon, dipping into the actual physics of transportation and looking for the empty spaces may result in viable solutions.

Even if WISES may not succeed in economically carrying cargo, I continue to think that there must be some mega billionaire out there who would think a WISES would make a supercool yacht. Think of that huge wing with cabins in it, with forward facing windows, and aft facing balconies under a raised wing flap when at rest. And all that speed to go from playground to playground without seasickness!

For each column I write, Maritime Reporter & Engineering News has agreed to make a small donation to an organization of my choice. For this column I nominate Webb Institute and donate to their Webstock Music Festival. Webbies may just be sufficiently weirdly creative to make WISES work.  http://www.webb.edu/

Since the 1980’s there has been a remarkable revival of ferry services in many US waterfront cities, but COVID has wreaked…