Maersk and Other Danish Firms Partner for Sustainable Fuels Project 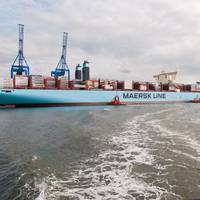 A group of Danish transportation and energy companies including shipping giant A.P. Moller - Maersk have teamed up to develop an industrial-scale production facility to produce sustainable fuels for road, maritime and air transport in the Copenhagen area.Maersk is joined in the project by DFDS, Ørsted, Copenhagen Airports, SAS and DSV Panalpina, who have brought together the demand and supply side of sustainable fuels to develop a new hydrogen and e-fuel production facility as soon as 2023. 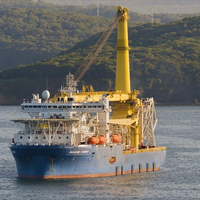 A Russian pipe-laying vessel Academic Cherskiy which Moscow can use to finish laying pipes for the Nord Stream 2 gas project, has moored near the German logistics hub in Mukran, Refinitiv Eikon tracking data showed on Monday.Led by the state gas company Gazprom, Nord Stream 2 had to suspend pipelaying works late last year, hit by fresh U.S. sanctions. The project is aimed at doubling existing undersea flows to Germany to 110 billion cubic meters per year.Cherskiy, bought by Gazprom in 2016, has sailed from the Russian Pacific port of Nakhodka where it was docked in December when the U.S. 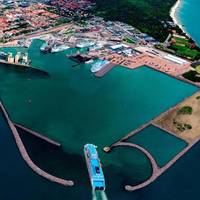 The European Investment Bank (EIB) has signed a SEK 445 million ($45.6 million) loan agreement with the Municipality of Ystad to expand harbor facilities so that new, larger liquefied natural gas (LNG) vessels on the Swinoujscie-Ystad line can access the harbor.The port in the southern-Swedish town is a busy connection point to the Polish Port of Swinoujscie and the Danish island of Bornholm. The project aims at increasing the capacity and upgrading the Port of Ystad facilities in order to accommodate larger ro-pax vessels over 240 meters in length…

Denmark has granted permission for the Russian Nord Stream 2 natural gas pipeline to be constructed across Danish seabed in the Baltic Sea, leading to Germany.The Danish decision puts greater pressure on U.S. Congress to quickly pass a sanctions bill to halt the project before it is completed.The pipeline being constructed under the Baltic Sea by Russia's Gazprom energy giant is nearly complete, but had not previously been granted permission to cross Denmark's exclusive economic… 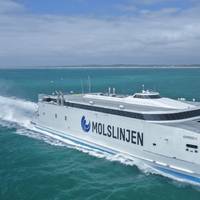 Perth-based ship manufacturer, Austal has penned a contract for the design and construction of a 115 meter, high-speed catamaran for Molslinjen of Denmark.The contract worth A$136 million is a follow-up order to the 109 meter high-speed catamaran Express 4, delivered to Molslinjen in January 2019, the new Auto Express 115 will be the largest ferry (by volume) ever built by Austal.The vessel will be fitted with a new generation of medium speed engines that are LNG compatible, and… 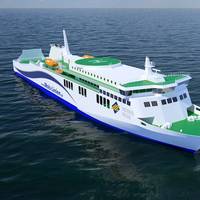 Danish ferry operator Mols-Linien has ordered a new passenger ferry from the Rauma Marine Constructions yard in Rauma, Finland. Rolls-Royce will provide the main propellers and propulsion control system to the new ship, which is planned to operate between mainland Denmark and the island of Bornholm, also known as the sunshine island of the Baltic Sea. Rolls-Royce will deliver two units of a Promas system which integrates the controllable pitch propeller, a propeller hub cap, a rudder with bulb and a twisted leading edge into one hydrodynamically optimized unit. 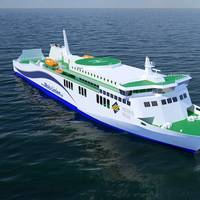 A new 158-meter-long car and passenger ferry being built for Danish operator Mols-Linien will be powered by two eight-cylinder Wärtsilä 31 main engines. The ship is being built at the Rauma Marine Constructions (RMC) shipyard in Finland. The Wärtsilä 31 was introduced to the market in 2015 and has been recognized by Guinness World Records as being the world's most efficient four-stroke diesel engine. This high efficiency was cited as being a key consideration in the award of this contract to Wärtsilä, the engine manufacturer said. 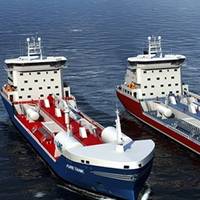 Deltamarin, a subsidiary of AVIC International Maritime Holdings, has been contracted by Finland’s Rauma Marine Constructions (RMC) shipyard to design a new ro-pax vessel. AVIC said Deltamarine will provide the Finnish Rauma Marine Constructions Oy shipyard with services for a ro-pax vessel to be built for the Danish Mols-Linien A/S. “The new 158-metre ro-pax vessel will be designed and optimised to carry passengers and cargo between the Danish islands of Bornholm and Sjaelland. The cargo capacity will be 1,500 lane metres,” a press release said.

Deltamarin Ltd is to provide the Finnish Rauma Marine Constructions Oy shipyard with design services for a ro-pax vessel to be built for the Danish Mols-Linien A/S. Deltamarin’s scope of work includes basic and detail design of the hull outfitting, machinery and cargo areas. The new 158-metre ro-pax vessel will be designed and optimised to carry passengers and cargo between the Danish islands of Bornholm and Sjaelland. The cargo capacity will be 1,500 lane metres. Construction will start in spring 2017 and the vessel will enter service in autumn 2018. Port of Ystad, which saw record-breaking volumes in 2015, continues reaching new record numbers in 2016 for traffic to and from Poland and the Danish island of Bornholm. The number of ton goods, trucks, busses, cars and passengers all showed an increase during the first half of 2016 compared to the same period last year. The biggest reported increase was the number of trucks with an 18.6 percent increase. In total 110,000 trucks passed through the port – a new record for Port of Ystad. The number of ton goods surpassed 1,650,000, also a port record with a 13 percent increase.

Statoil today enters the German offshore wind market, through a 50% acquisition of the Arkona offshore wind farm. Statoil and E.ON also announced the final investment decision on the 385 megawatt project. The estimated total investment for the project will be in excess of EUR 1.2 billion. The Arkona wind farm will provide renewable energy for up to 400,000 households in Germany, making it one of the largest ongoing offshore wind developments in Europe. “We are pleased to announce our decision to develop this significant offshore wind project together with E.ON. 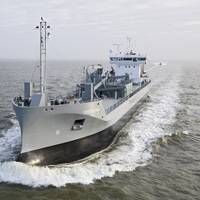 Sea trials aboard Greenland, the world’s first LNG-fuelled short-sea dry bulk vessel, have validated the performance of Thordon Bearings COMPAC propeller shaft solution, indicating that seawater-lubricated bearing systems are applicable to all ship types and are definitely here to stay. "Erik Thun has truly raised the standard in sustainable shipping with this vessel, pushing the boundaries of environmental possibilities to a completely new level," said Tommy Holmgren, Sales Director with the Duwel Group, Thordon Bearings’ distributor in Sweden.

Record Traffic in Port of Ystad 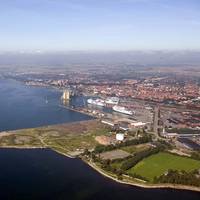 Port of Ystad saw record breaking traffic numbers in 2015, retaining the port’s position as Sweden’s third largest ferry passenger port. The largest increase was in bus traffic, which increased by 30,7 % compared to 2014. “The numbers from 2015 show that the traffic in Port of Ystad continues to grow, with the exception of railway waggons where we saw a minor decrease. The conventional goods as well as goods on trucks and trailers increased, making the total number higher than last years” says Björn Boström, CEO of Port of Ystad. The number of passengers increased by 1,5%.

Vessel sales for September 2015 (as of October 1) as prepared by Shipping Intelligence, Inc., New York.

Danish shipping company said on Wednesday it has sold two dry bulk vessels to an undisclosed buyer and will hand back a leased bulker at the beginning of October, marking its exit from the dry bulk shipping industry. Torm Anholt and Torm Bornholm are both so-called Panamax vessels and both built in 2004. The Copenhagen-based shipping company kept its full-year profit guidance of an earnings before interest, taxes, depreciation and amortization (EBITDA) between 190 million and $230 million. (Reporting by Ole Mikkelsen)

First Visit to the Port of Kiel by Mein Schiff 3 New TUI Cruises flagship welcomed at the Ostseekai. Mein Schiff 3 - the new flagship of TUI Cruises, and currently also the biggest cruise ship sailing with any German shipping company, has arrived in the Port of Kiel on her maiden visit. The new 99,500 GT, 294 m long ship was welcomed with a water fountain display from a port tug when she entered the Kiel Fiord. At a traditional on-board reception later Dr Dirk Claus, Managing Director of the Port of Kiel (SEEHAFEN KIEL) and Robert Vollborn… 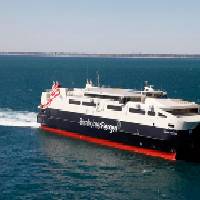 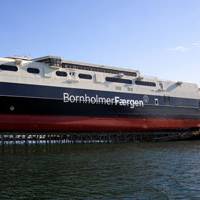 The final stages of construction of Austal’s largest catamaran to date were celebrated this week with a traditional coin ceremony, followed by the vessel’s successful launch. Placing a coin at the foot of the mast of a newly constructed ship is an ancient maritime tradition which is believed to bring good luck to the vessel and its crew. Senior Captain Soren Schow travelled from Denmark with a coin from the year 1660. This coin holds significance as it is from the same era as the ship’s namesake, Danish historical icon, Leonora Christina.

Swedish coastguards reportedly planned to board a U.S. ship they suspect is taking divers to examine the wreck of the ferry Estonia, which sank in the Baltic Sea in 1994 with the loss of 852 lives. Sweden strongly opposes but cannot prevent foreign nationals from diving, as it lies in international waters off Finland. American businessman Greg Bemis has said he plans to send divers to investigate reports that the car and passenger ferry might have been damaged in an explosion before it sank in a Baltic storm in September, 1994. Coastguards said the One Eagle vessel owned by Bemis was sighted north of the Danish Baltic island of Bornholm, heading north.

Damen Shipyards Gorinchem won a contract to build a 41-m aluminium monohull fast ferry for the Danish operator, Christiansøfarten A/S, based on the island of Bornholm. The new ferry will service routes between the Danish islands of Bornholm and Christiansø, as well as on the town of Simrishamn in Sweden. The owner, Christiansøfarten currently services these three routes with conventional coastal ferries. The new vessel will be delivered in March 2006, in time for the beginning of the European summer tourist season, and will be built at Damen Shipyards Singapore. Seating for 245 is arranged inside on the main deck in air-conditioned comfort with heating and cooling. Another 66 seats are fitted externally on the upper deck. Kiosk, toilets and luggage facilities are fitted on the main deck.