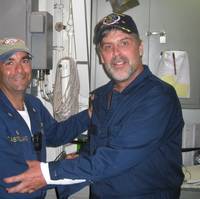 U.S. Navy sailors aboard amphibious assault ship USS Boxer took time to reflect on the anniversary of the rescue of Capt. Richard Phillips from Somali pirates in the Gulf of Aden seven years ago. Phillips was rescued April 12, 2009 by special operations personnel aboard USS Bainbridge and transferred to Boxer for medical evaluation and care. Boxer also served as a staging platform for the rescue operation. “This is a great reminder of the flexibility and warfighting spirit USS Boxer exhibits; always ready to respond, no matter the crisis, operation or mission,” said Capt.

Guy Harvey to be Honored by Seafarer's House 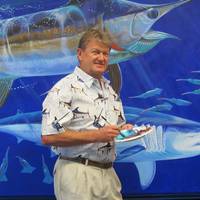 Guy Harvey – artist, conservationist and entrepreneur – has been selected as this year’s recipient of the Seafarers’ House International Golden Compass Award. The award is given each year to those who have achieved distinction in the maritime world, those whose vocation or avocation has been the sea, or those who have ministered to or otherwise assisted seafarers. Dr. Harvey has been a champion of the seas since an early age. A student of marine biology, he has spent his life exploring the undersea world and bringing it to life on land through his art…

Seafarers & International House will hold its 14th annual Setting the Course awards banquet the at the New York Athletic Club on Tuesday evening, April 22, 2014 to honor Donald J. Marcus, Edward R. Morgan and Captain Richard P. Phillips as the 2014 Outstanding Friends of Seafarers. •Don Marcus is the President of the International Organization of Masters, Mates & Pilots, having served for many years as its Secretary-Treasurer. He is also the first president of the Maritime Labor Alliance (MLA), an organization formed by six unions to revitalize the U.S flag feet, to enhance cooperation within the maritime industry and to protect the jurisdictional rights of the maritime union members. 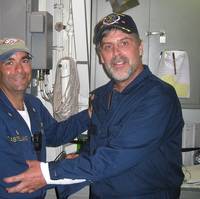 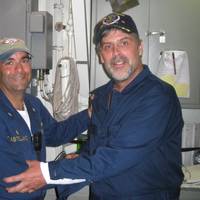 Pilot Freight Services, a worldwide provider of transportation and logistics services, announce its recognition by three trade publications. Pilot Freight Services, Inc. is a full-service transportation and logistics provider with over 75 locations throughout North America and a recently opened station in Amsterdam, Netherlands. The company’s freight forwarding services encompasses every mode of transportation, including air, ground and ocean. The company was awarded its 23rd Quest for Quality Award from Logistics Management magazine, and recognized as the #1 Overall Freight Forwarder. Additionally, Pilot was named to Inbound Logistics magazine’s Top 100 3PL Providers list, and SupplyChainBrain’s “100 Great SC Partners” list.

Pilot Freight Services announce reported revenue of $126.5 million for the second quarter, ending June 30, 2012. This marks a 12.5 percent increase over the same period in 2011 and a continued strengthening in the momentum of ten consecutive quarters of revenue growth. Pilot Freight Services, Inc. is a full-service transportation and logistics provider with over 75 locations throughout North America. Pilot is also a founding member of the World Freight Alliance (WFA), operating in more than 190 countries worldwide. The company’s freight forwarding services encompasses every mode of transportation, including air, ground, and ocean, serving all corners of the globe.

The five-day saga off the coast of Somalia ended when Navy SEALs killed three of  the ship's masters' captors in a volley of rifle fire and a fourth pirate had previously surrendered to the Navy. Though the master of Maersk Alabama, Captain Richard Phillips, was hailed as a hero, 11 former crew members allege in lawsuits filed in Norfolk Circuit Court and in Mobile, Ala., that his employers, through Phillips' actions, put them in grave danger when the ship sailed within about 250 miles of the Somalian coast despite warnings to stay at least 600 miles out because of pirate activity, according to 'The Virginia Pilot'. Together…

U.S. Transportation Secretary Ray LaHood reminded mariners about the importance of taking necessary precautions and implementing best practices in the wake of recent attacks on the M/V Harriett and Maersk Alabama off the coast of Somalia. “These ships’ successful defense against pirates should serve as a reminder to the maritime industry of the best practices that can keep crews safe on the seas,” said Secretary LaHood. “Mariners should heed the lessons learned from past attacks and review defensive measures so that they are prepared when traveling through high-threat areas. The U.S. government will continue to work with ship operators to protect U.S. Last week, the M/V Harriett thwarted a pirate attack by outrunning the pirate ship.

MANAMA, Bahrain, Nov. 18, 2009 - The U.S.-flagged Maersk Alabama's security team repelled an attack from suspected pirates this morning 560 nautical miles off the northeastern coast of Somalia, U.S. Naval Forces Central Command officials reported. Four suspected pirates in a skiff came within 300 yards of the Maersk Alabama and used small-arms weapons in an attempt to board the ship.The ship's security team responded with evasive maneuvers, long-range acoustic devices and small-arms fire, causing the suspected pirates to break off their attack. The acoustic devices emit a high-pitched sound that can be painful to human ears. "Due to Maersk Alabama following maritime industry's best [anti-piracy] practices such as embarking security teams…

For the first time since his dramatic rescue at sea, Captain Richard Phillips of the Maersk Alabama will publicly thank the commanding officer and crew of the USS Bainbridge during a ceremony in Norfolk, Virginia on November 19. The ceremony will take place on the fantail of guided missile cruiser at 2 p.m. The USS Bainbridge will be moored on the downtown Norfolk waterfront. The Maersk container ship was captured by rogue pirates off the coast of Somalia on April 8. Captain Phillips offered himself as a hostage in exchange for the safety of his crew. For four days, while the world watched, Phillips was held captive in a 25-foot lifeboat.

The officers and crew of the Maersk Alabama, who fought off a pirate attack earlier this year, will be represented by Captain Richard Phillips, Chief Engineer; Michael Perry, and Bosun William Rios in accepting an Honored Seafarers plaque at the 40th annual United Seamen's Service (USS) Admiral of the Ocean Sea dinner on November 13, 2009. "We are pleased that all three unions aboard the ship will be represented by the vessel department heads at this signature maritime event," said Edward R. Morgan, USS President. The unions are the International Organization of Masters, Mates and Pilots, Marine Engineers Beneficial Association and the Seafarers International Union of North America.

A Journey Through the Gulf of Aden

On Sunday, August 2, Douglas B. The waters off the coast of Somalia drew media attention when, in April, a container ship owned by United States-based Maersk Line Limited was seized. The ship’s captain, Richard Phillips, was taken hostage by pirates and held at gunpoint for five days. The attack was one of 80 in the area since the beginning of 2009. The Director of SCI’s Center for Seafarers’ Rights, the world’s only full-time, free legal aid program for merchant mariners, says that he hopes to draw attention to the professional seafarers themselves and their work, which is vital to the world’s prosperity. To collect data and give exposure to his expedition, Stevenson will make careful observations and share many of them in real-time using Twitter. 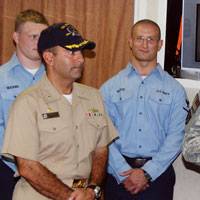 The head of U.S. Central Command visited the guided-missile destroyer USS Bainbridge while in port to thank sailors for their work while deployed to U.S. 5th Fleet, as well as for their role in the rescue of Richard Phillips, the Maersk Alabama cargo ship captain held captive by Somali pirates. Army Gen. David H. Petraeus held an all-hands call with Bainbridge's sailors and presented awards to three sailors for rescuing Phillips after he was held by pirates for five days in April.

Congressman Elijah E. Cummings (D-Md.), Chairman of the House Subcommittee on Coast Guard and Maritime Transportation, joined his colleagues in a vote of 389-22 to approve the National Defense Authorization Act, H.R. 2647, which included a Cummings amendment that would require the Department of Defense to protect U.S.-flagged ships at risk of being boarded by pirates. “We would never leave the U.S. homeland unguarded if it were at risk of an attack, and we should apply this same standard to our ships instead of leaving them to fend for themselves,” Congressman Cummings said. As the number of incidents of piracy in the Horn of Africa region continues to rise, U.S.-flagged vessels are increasingly at risk of being hijacked.

Below is the opening statement given by Chairman Elijah E. On February 4, 2009, I convened this Subcommittee to examine international piracy on the high seas, particularly in the Horn of Africa region. At that time, no U.S.-flagged vessels had been attacked by pirates – and the general conclusion among our witnesses was that ships should focus on implementing the anti-piracy measures that had been identified as likely to thwart attempted pirate attacks, such as transiting the Horn of Africa at night and at the highest possible rate of speed and employing non-lethal measures such as water hoses. Now, however, we convene in very changed circumstances. Two U.S.-flagged vessels – the Maersk Alabama and the Liberty Sun – have been attacked by Somali pirates.

Statement on Piracy by CG Commandant

Statement on Piracy by CG Commandant, Adm. Piracy has been rightfully called an insult to civilization. The recent pirate attacks on the motor vessels Maersk Alabama and Liberty Sun focused the attention of the American public on what has been an increasingly significant international issue. It is important that the American public and the international community know that the U.S. Government is working hard to find an enduring international solution to this international problem. Maritime piracy is a symptom of instability in Somalia. The only long-term solution must address piracy’s root causes in Somalia itself: political instability and lack of economic opportunity. The U.S. supports a reconstituted Somalia with lawful control over its entire territory.

In a letter to the President, House Armed Services Committee Chairman Ike Skelton (D-MO) urged the administration to protect U.S. interests by denying safe haven for pirates along the coast of Somalia. Skelton also requested a meeting with administration officials to discuss the long-term options being considered for the U.S. and the international community to prevent piracy and promote governance and security in Somalia. Dear Mr. I want to congratulate and thank you for your strong leadership with regard to the hijacking of the M/V MAERSK ALABAMA and the subsequent rescue of Captain Richard Phillips. Your consistent engagement played a crucial role in the safe return of a brave American.

The U.S. military's rescue of a kidnapped American ship captain was textbook, but the issue of piracy is likely to worsen in the absence of a systemic solution, Defense Secretary Robert M. Gates said April 13. Off the Somali coast yesterday, U.S. special operations snipers on the USS Bainbridge shot and killed three pirates who had held hostage the captain of the Maersk-Alabama cargo ship on a lifeboat for five days. Military officials said Capt. Richard Phillips' life was in imminent danger at the time of his rescue. "It was textbook," Gates said of the operation. "They were patient. Gates, speaking at the Marine Corps War College here… 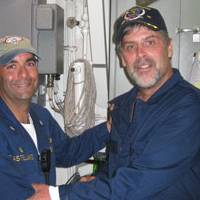