Metal Shark is Competing - and Winning - Here and Oversees 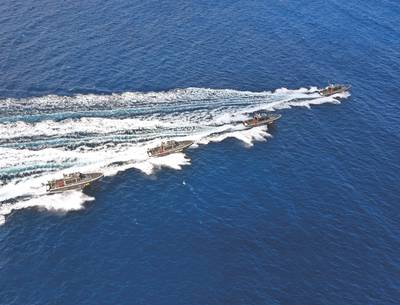 U.S. shipbuilder Metal Shark powers into the second half of 2018 with a healthy backlog, multiple recent deliveries into foreign markets, and a portfolio of patrol craft that has attracted multiple clients – here and abroad.

At a time when more than a few workboat builders are feeling the pain of lingering offshore malaise and an oversupplied inland market that no longer needs large quantities of barges, Louisiana-based Metal Shark has found its groove in a suddenly active and highly competitive niche market. In fact, by the end of 2018, Metal Shark’s military vessels will be either in service or in production for nearly 50 countries across Africa, Asia, the Caribbean, the Middle East, and Latin America. The last 18 months in particular, have been especially busy with Metal Shark delivering boats to over 12 countries.

Exporting Quality in Volume
Key patrol boat contracts for this rapidly expanding builder include the U.S. Coast Guard Response Boat – Small (RB-S). Over 300 of these units are service since the award of the contract in 2012 and, says Metal Shark, new units are in production and shipping weekly. Separately, over 50 of the U.S. Navy Force Protection Boat – Medium (FPB-M) have already been delivered and are in service. That contract, too, is still active and boats are shipping regularly.

Looking ahead, Metal Shark was awarded a contract in October 2017 to produce up to 50 of the U.S. Navy’s next-generation patrol boat, the PB-X. Production for this contract will commence later this year. Earlier, Metal Shark won yet another award; a contract to produce up to 13 Near Coastal Patrol Vessels (NCPVs) for U.S. DOD FMS partners. These boats, intended for delivery to Costa Rica, Dominican Republic, El Salvador, Honduras, Guatemala, and other US FMS partner nations, will also see production kick off this year. Notably, the NCPV design is the first fruits of a multiyear partnership with global shipbuilder Damen. Based on the proven Damen 2606 Stan Patrol design, modified by Metal Shark to meet specific customer requirements, these hulls will be constructed at Metal Shark’s Franklin, La. shipyard.

Beyond these largely domestic contracts, however, Metal shark has also managed to do what many U.S. yards have not: sell in volume to foreign buyers. Specifically, recent deliveries and contracts involve sales to Bangladesh, Bulgaria, Curacao, Colombia, Jordan, Kenya, and Vietnam, just to name a few. A four boat delivery to the Puerto Rico police department doesn’t necessarily qualify as an ‘export’ but that contract undercores just how busy Metal Shark has been, all on the heels of the highly publicized multi-boat delivery of ferries to the New York City markets.

The Damen connection has also brought a new dimension to Metal Shark’s portfolio. With a nod to Damen’s highly successful and long running ‘stock’ hull program, Metal Shark has begun their own version of this program, with the double intent of keeping personnel busy during slack periods (this won’t be a problem, apparently, any time soon) as well as delivering hulls to customers much faster.

All that said; three recent contracts / deliveries stand out in particular.

Metal Shark Vice President of International Sales put this contract in perspective when he said, “This award is the result of a multi-year dialogue between Metal Shark, the Dutch Ministry of Defense, and DCCG end user operators in Aruba, Curacao, and St. Maarten. The DCCG selected Metal Shark due to our high quality construction, our ability to meet their operational requirements with our proven 38 Defiant design, and the flexibility of our in-house design team to modify the vessel to meet their mission set.”

Designed in-house by Metal Shark and built at the company’s Jeanerette, La. production facility, the welded aluminum, enclosed-pilothouse, 38 Defiant monohull patrol boats are the result of a multi-year effort by the DCCG to procure a replacement for its fleet of open-cockpit RIBs. The new vessels, modified specifically for local requirements, will serve as the DCCG’s main interceptors, patrolling the territorial waters of Aruba, Bonaire, Curacao, St. Eustatius, St. Maarten, and Saba.

Two Ways to Serve the U.S. Virgin Islands
Just prior to their four-hull delivery to Curacao, Metal Shark in April also delivered two new custom welded aluminum vessels to the Virgin Islands Port Authority (VIPA). The vessels, designed by Metal Shark and built at the company’s Jeanerette production facility, were delivered to St. Thomas and transferred to VIPA. Both vessels are now operating and serve the island of St. Thomas and also nearby St. John.

Powered by twin Cummins Marine QSM11 diesel engines coupled with Hamilton HJ322 waterjets, the 45 Defiant Pilot demonstrates pinpoint maneuverability while delivering a cruise speed in excess of 30 knots and a top speed in the 40 knot range.

For its new port security patrol boat, VIPA selected Metal Shark’s 32’ Defiant, a proven patrol platform with over 100 units in military and law enforcement service worldwide. Funded in part by a FEMA Port Security Grant, the vessel has been outfitted with a positive-pressure Chemical, Biological, Radiological, Nuclear, and high-yield Explosive (CBRNE) crew protection system to assure safe and uninterrupted operation in a wide range of disaster response scenarios.

“Metal Shark has expanded into the pilot boat market by applying the same principles that made us so successful in the military patrol boat sector,” explained Metal Shark’s CEO Chris Allard. “We start with a proven hull design to deliver a boat that performs well and is built to last. Beyond that, we focus on offering genuine improvements by incorporating modern features into smarter and more user friendly arrangements that simply work better than what’s out there. We continue to gain customers in new markets by delivering improved platforms that deliver tangible and sometimes unexpected benefits to operators.”

Underscoring the increasingly cordial relationship between Washington and Hanoi, the new Metal Shark patrol boats were handed over during the inaugural visit of U.S. Coast Guard Vice Admiral Fred M. Midgette at a delivery ceremony on March 28th at the Vietnam Coast Guard’s Region 4 station on Phu Quoc Island, the farthest southwestern territory of Vietnam. The boats were part of a 20 million dollar transfer of infrastructure and equipment by the U.S. to Vietnam.

Competing and Winning in Overseas Markets
Metal Shark will tell you that there’s no silver bullet for making it happen in the export markets, especially where it involves patrol boats and other military craft. It’s about price, to be sure, but more importantly, it has more to do with quality, prompt, on time deliveries, and the ability to provide service after the sale.

It’s simpler than that, actually. Metal Shark’s CEO Chris Allard told Marine News in May, “With our extensive portfolio of great-performing hull designs and the flexibility of our design team to meet customers’ needs with innovative solutions, we continue to expand Metal Shark’s global footprint.” By-the-Numbers, that adds up to 50 countries, hundreds of boats delivered and an enviable backlog. Who says U.S. yards can’t compete in the international arena? Today, Metal Shark is not only competing; they’re also winning – here and across the Big Pond.


(As published in the June 2018 edition of Marine News)