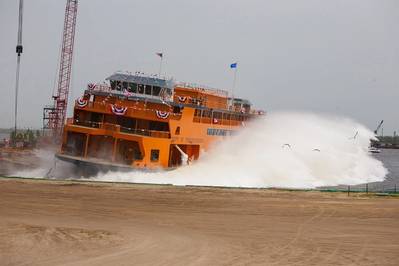 The new Staten Island Ollis Class Ferries series are named after fallen soldier of the US Army 10th Mountain Division at Fort Drum, 'Climb to Glory', Army Staff Sgt. Michael H. Ollis, a Staten Island native killed in Afghanistan on August 28, 2013 serving during Operation Enduring Freedom. The first of the series, Hull 219, is named in his honor. Staff Sgt. Michael H. Ollis, of the 2nd Battalion, 22nd Infantry Regiment, 1st Brigade Combat Team, 10th Mountain Division (Light), stepped into the path of a Polish officer, blocking him from the suicide vest of an insurgent who had raided Forward Operating Base Ghazni. Ollis has received several honors posthumously including: Distinguished Service Cross, Purple Heart, Bronze Star, Silver Star, The Audie Murphy Medallion, Polish Gold Star Medal of Honor, and the Afghanistan Star from Poland for his valor. He was 24 years old.

With the delivery of Time Traveler, shipbuilder Metal Shark has completed its four-year run of vessel production for NYC Ferry…