Tug Master Falls Asleep at the Helm and Crashes Into Dock 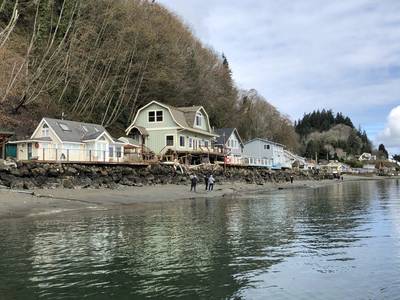 A gravel barge allided with private docks and homes near Gig Harbor, Wash., after the master of the towing vessel fell asleep at the helm.

The U.S. Coast Guard said Monday that its watchstanders at Sector Puget Sound received notification from Pierce County dispatch that an unmanned gravel barge, under tow by the towing vessel Island Chief, had smashed into several privately-owned docks and residences. No injuries or pollution have been reported.

Initial findings indicate that the master of the towing vessel fell asleep while navigating the vessel, the Coast Guard said, adding that drug and alcohol testing have been initiated for all personnel directly involved in the incident.

The barge, which held no cargo at the time of the incident, was pulled free by the tug under its own power, neither of which were seriously damaged, and returned to Seattle for further investigation and inspection.

The Coast Guard said an investigating officer has determined this to be a serious marine incident, and initial damage estimates could be greater than $250,000.

“Incidents such as this are very concerning,” said Cmdr. Nathan Menefee, Chief of Prevention at Sector Puget Sound. “Fortunately, nobody was injured, and the towing vessel did not release fuel or oil into the water. Sector Puget Sound will investigate the incident to determine the cause and whether additional actions are necessary to prevent a similar incident in the future.”