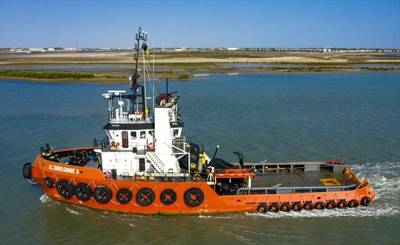 Watchstanders at Coast Guard Sector/Air Station Corpus Christi command center received a medevac request at 7:16 a.m. via VHF Channel 16 from the crew of the El Zorro Grande, a tugboat transiting outbound on the Brownsville ship channel, stating the captain had passed out, officials said.

The SPC-LE crew arrived on scene, embarked the 49-year-old tug master, and transported him to awaiting emergency medical services at an oil dock in Port Isabel, Texas, the Coast Guard said.

A Brownsville pilot, who was aboard at the time, maneuvered the St. Vincent and the Grenadines-flagged tug back to the cargo dock.

“Our crew had an amazing response time which allowed us to arrive on scene as quick as possible," said Petty Officer 2nd Class Ali Rae Sheppard, Station South Padre Island SPC-LE coxswain. "The corpsman recommended the captain be brought to EMS to get checked out and thanks to the incredible response time from our crew and EMS, we were able to get him the help he needed.”