Vessels Queue Grows as Salvage Continues on the Intracoastal Waterway Nearly 200 towing vessels and 600 barges are queued on the Intracoastal Waterway while salvors work to clear a halved and partially sunken rock barge near Berwick, La., the U.S. Coast Guard said.

A section of waterway has been closed since Sunday night, when a towing vessel pushing six rock-filled hopper barges ran aground at mile marker 99.

The push boat Miss Odessa was reportedly transiting southbound on the Atchafalaya River when it turned west onto the Gulf Intracoastal Waterway and hit bottom. One of the barges, ACL 01700, split in half and sunk when the vessel attempted to break free. There was no damage to the Miss Odessa or the other five barges.

The towing vessel company hired a salvage firm to assist members from Coast Guard Marine Safety Unit Morgan City and Marine Safety Center’s Salvage Engineering Response Team in clearing the heavily damaged barge and more than 1,600 tons of the aggregate rock cargo in the challenging waterway location. Salvage efforts have continued day and night, and by Thursday morning more than 80% of rock cargo had been removed, the Coast Guard said.

As of 1:30 p.m. on Thursday, the queue of vessels awaiting transit included more than 190 towing vessels and 560 barges, the Coast Guard said. The Coast Guard Houma captain of the port has secured all tow traffic in the location.

“The location of the wreck is in a particularly critical point along the Gulf Intracoastal Waterway, as it is adjacent to the intersection with the Atchafalaya River, a meeting point for two major shipping channels, along which most of the gulf’s maritime commerce transits,” said Lt. Cmdr. Zach Robertson, prevention department head at Coast Guard Marine Safety Unit Morgan City. “This area is unusually challenging to navigate this time of year due to seasonal high water levels and rapidly changing currents.”

Once the waterway reopens, the Coast Guard expects it will take an additional three to four days to move queued vessels through the waterway and return to normal operations, based off current traffic forecasts and queue estimates. 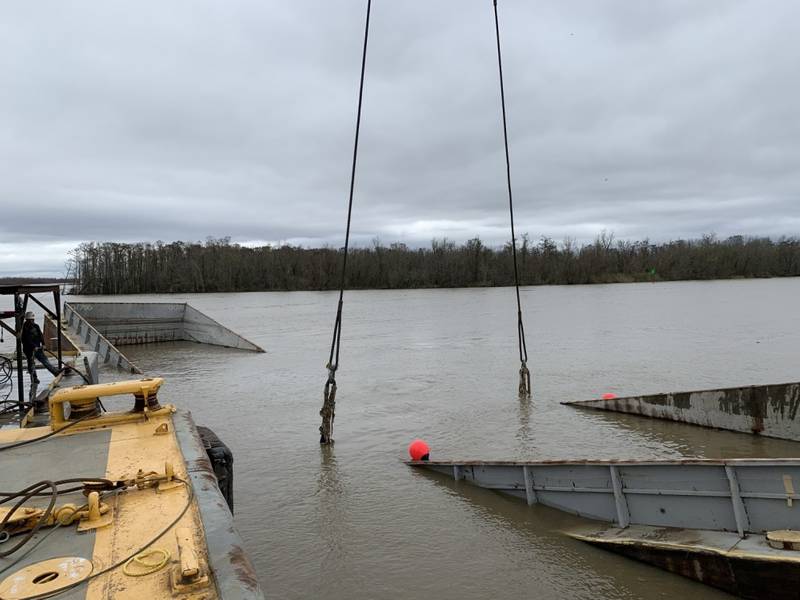 Salvors work to remove a sunken rock barge and its cargo after a grounding on the Gulf Intracoastal Waterway. (Photo Alexandria Preston / U.S. Coast Guard)