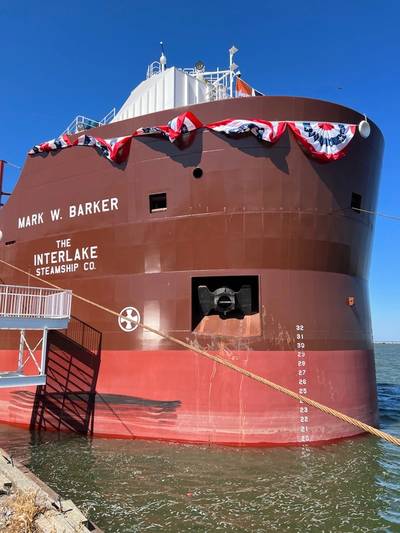 Jacksonville Shipyard was a well-known repair yard that was particularly well known for servicing the Jones Act tanker fleet and Gino Ferrari was its New York representative. Each Christmas season Gino hosted a reception at the Four Seasons restaurant for tanker Owners.

Gino Ferrari was a close friend of the company and my father always received an invite. When I joined Martin & Ottaway in 1988, my father could not attend the Jacksonville Shipyard tanker party and deputized me to attend.

I was 28 and had only been with the company for a few months and did not know many of the luminaries who attended. The attendees were very senior port engineers, vice presidents of operations and even some actual tanker owners.

When I arrived, Gino graciously introduced me to some of the attendees as a new surveyor at Martin & Ottaway and almost in unison they said: “Nice to meet you, young man. Welcome to a dying industry.”

I had become familiar with that sentiment almost the moment I started with Martin & Ottaway. The US fleet was rapidly shrinking, commercial ship construction was just about zero in the United States, and even maritime academies were facing reduced enrollment. All was gloom and doom and here I joined an industry that was dying. But I saw a glimmer of hope; and, when faced with the “welcome to a dying industry comment,” I had a ready answer, and it worked particularly well at the tanker party.

I responded with: “Well, I don’t mean to cast aspersions; but when I look at this crowd, you all will be done in 10 years and I don’t know what will be left of the industry, but whatever is left will be all mine.” There was a half second pause and then there was a good chuckle and even some slaps on my back and clinking of glasses.

It turned out that was the last tanker party; and, while I still got to work at Jacksonville Shipyard once or twice and even have lunch in the blue room, the yard closed in the next few years. It really looked like the industry was dying.

However, it turned out everyone at the tanker party was wrong. The industry did not die, it just did what it always did; it changed. The luminaries who thought the industry was dying were just reflecting on the things that had kept them busy during their career, but they did not have the time, or opportunity, to see what was going on outside their cockpit.

And things were happening outside their cockpit; there was a ferry revival, the cruise industry exploded, large yacht construction took off, there was another offshore boom, there was a drive to environmental responsibility and, today, with offshore wind and sustainable energy added to the mix, the industry is more vibrant, dynamic and technically challenging than it may have been since WWII. 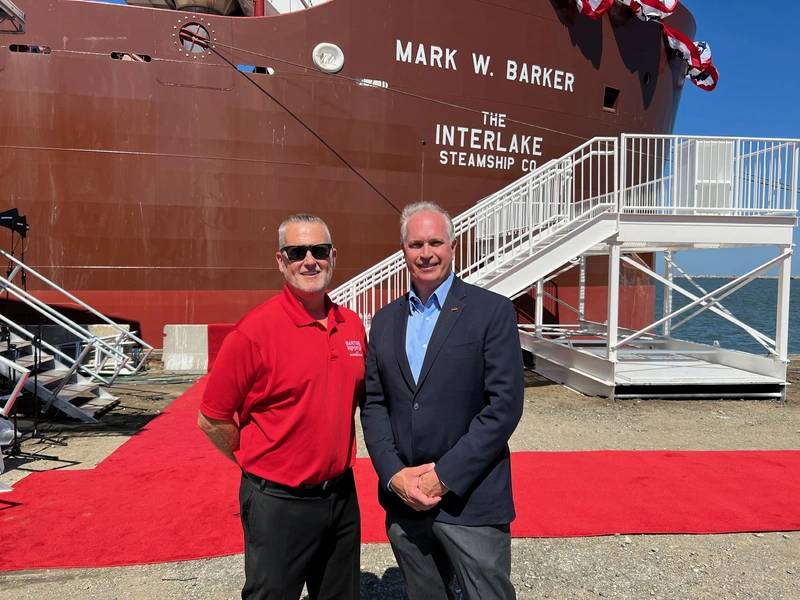 Greg Trauthwein and Mark W. Barker, President of The Interlake Steamship Company, in front of his namesake ship a day in advance of its christening. Photo courtesy Maritime Reporter & Engineering NewsNeedless to say, the industry did not become all mine. The traditional US Jones Act trade that the tanker party attendees knew so well is still here. However, in the passing decades, collisions, mechanical failures, and other mishaps have been much reduced and the industry is even less visible than it was in the late 1980’s.

But it is still there, and on September 1, 2022 I was a guest at the christening of the M/V Mark W. Barker, the first newbuild Jones Act laker since before I attended the tanker party at the Four Seasons.

Strangely, this was my first attendance at a christening of a large commercial vessel in my entire career. This is mostly due to the fact that the pace of the industry changed since the 1980’s. Up till then any excuse for a party was a party, with a casualty list to match. Soon after, with decreasing profit margins and increased focus on profitability, parties became rarer and pushing new ships into the trade without a pause to celebrate became the norm.

Fortunately, Interlake Steamship felt a proper party was in order for this vessel, and it was a lovely party on so many levels.

The Mark W. Barker is not a traditional laker; she is designed for the future. She is not just a self-unloading bulker; she is also configured to be able to carry oversize cargo such as wind turbine blades. Hopefully, with her designed-in versatility, she will be a bellwether to a new approach in Great Lake cargo carriage, and just this aspect warranted pause for celebration.

However, what I enjoyed most was the crowd in attendance. It consisted of the extended Barker family (who operate not just lakers, but also tugs and ferries), Interlake, Seastreak, and Moran employees and retirees, equipment suppliers, shipyard people, ship’s crews, union reps, USCG representatives, classification surveyors, designers, cargo shippers, press, politicians, cargo manufacturers, underwriters and finance people. Many of whom attended with their families and kids, and it even included less desirable characters such as surveyors. All these people committed to the industry in one big tent and all committed to a long and profitable life for the Mark W. Barker.

Fair winds, Mark W. Barker. Welcome to a thriving industry. It ain’t all mine, but thanks for letting me be part of it.

For each column I write, MREN has agreed to make a small donation to an organization of my choice. For this column I select the National Museum of the Great Lakes. Not just about the past, also the present. www.nmgl.org 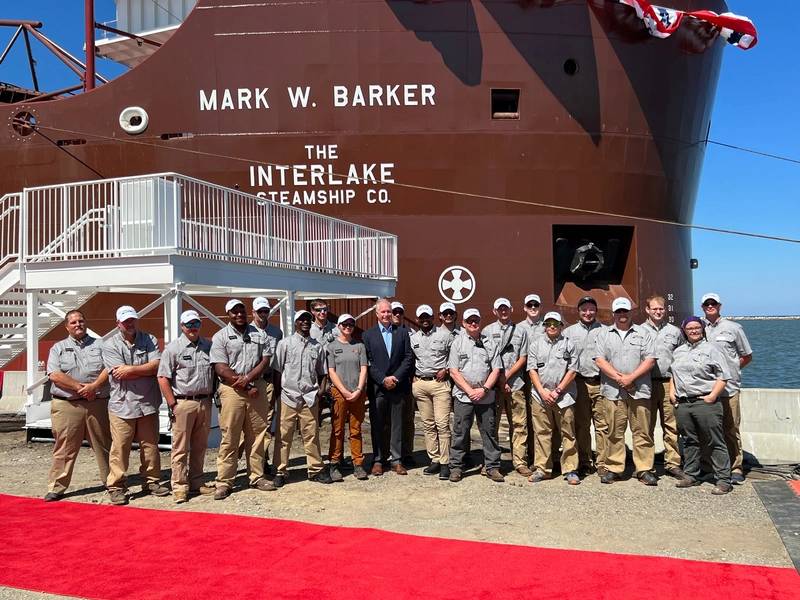 Mark W. Barker, President of The Interlake Steamship Company, in front of his namesake ship and its crew. Photo copyright Greg Trauthwein