Shipbuilding is the construction of ships, which takes place in a specialized facility known as a shipyard. Shipbuilders, also called shipwrights, are workers which specialize in vessel construction and repair. The construction of boats is called boat building. Due to the smaller size and scope of the vessels being produced, boats do not necessarily require the full services of a shipyard but may be built in a boatyard or even smaller private facility.

Block construction is a modern shipbuilding method which involves the assembly of prefabricated sections. Cross-sections of the superstructure are pre-built in a shipyard, taken to the building dock (or slipway,) and then hoisted into position and attached. Some of the more equipped shipyards are able to build equipment and utilities into the blocks, pre-installing pipes, plumbing, and electrical cables. The more components that can be built into the blocks before final assembly, the less effort required once the hull is welded together.

Since the 40s, modern ships have been made of welded steel. The first ships produced by this method had problems with inadequate fracture toughness, which let to rare but devastating structural cracks. The development of specialized steel in the 50s has largely eliminated the problem of brittle fracture, although there are still instances due to the unregulated use of grade A and B steel. This problem seems to result when steel with unknown toughness or FATT (fracture appearance transition temperature) is used in side shells. Despite these occasional incidents, most problems with brittle fractures seem to have been eliminated my modern methods and regulation.

Depending on design and materials, vessels reach a point in their lifespan where refitting and repair become impractical or impossible. The demolition of ships is called ship breaking- a process designed to allow materials and components to be reused and recycled. Equipment can often be reused in other ships, and metals (particularly steel) are separated for scrap recycling, with the hulls being discarded in ship graveyards.

Engineering and industrial software providers Cadmatic and CONTACT Software have…

Following the news on Wednesday that Crest Wind, a joint venture between Crowley and ESVAGT… 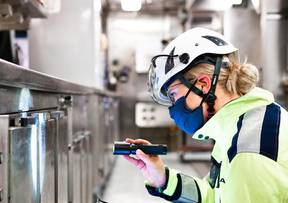