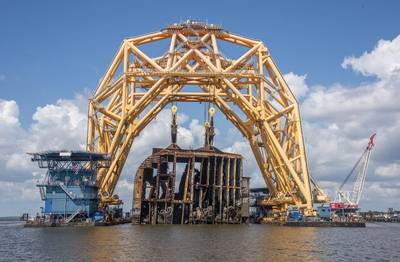 The largest shipwreck removal project in American history is drawing to a close.

On Monday, salvage personnel removed the final section of the overturned car carrier Golden Ray, which capsized in the St. Simons Sound near Georgia's Port of Brunswick in September 2019.

The ensuing salvage project—considered to be the largest and most complex in U.S. waters—required more than 3 million collective manhours as crews cut the 656-foot ship into eight sections for lifting and barge transport to a local facility for partial dismantling. The pieces will then be shipped to a site in Louisiana for recycling.

"We have accomplished a great feat. Over the last two years we have rescued 23 crew members, four of which were stuck inside the engine compartment for over 30 hours, none sustaining life-threatening injuries. Now we have completed the largest wreck removal in U.S. history," said Commander Efren Lopez, U.S. Coast Guard Federal On-Scene Coordinator.

The Korean-owned ship was declared a total loss in October 2019, and fuel had been removed from the ship's 26 tanks by mid-December 2019. More than 320,000 gallons of oil and water mixture were removed.

A series of 16 lifting lugs were lugs installed on the capsized vessel, clearing way for the T&T Salvage crew to begin cutting and lifting operations utilizing the Versabar specialized heavy lift vessel VB-10,000—fitted with lengths of chain to cut the wreck into sections and two 255-foot tall gantries to lift them—in November 2020.

The project was hit with a number of setbacks along the way. Teams encountered delays relating to severe storms and difficult environmental conditions, a COVID-19 outbreak among crew, equipment failure and adjustments, oil spills and a major fire inside the wreck.

Now, with all eight sections cut and removed, crews have turned their attention toward debris removal and the demobilization of on-site salvage assets.

The capsizing was found to be caused by inaccurate stability calculations, the National Transportation Safety Board (NTSB) said last month. The agency said the Golden Ray's chief officer entered inaccurate ballast quantities into the stability calculation program, leading to his incorrect determination of the vessel’s stability and ultimately resulting in the Golden Ray having an insufficient righting arm to counteract the forces developed during a turn while transiting outbound from the nation's second largest car port.

All 23 crewmembers and one pilot on board were rescued, including four engineering crew who were trapped for nearly 40 hours before they could be rescued through a hole drilled into the Golden Ray's hull. Two crewmembers sustained serious but non-life-threatening injuries.

The Marshall-Islands-flagged ship was severely damaged by fire, flooding and saltwater corrosion, and it was declared a total loss estimated at $62.5 million. Some $142 million worth of cargo, including more than 4,100 vehicles, was also lost. 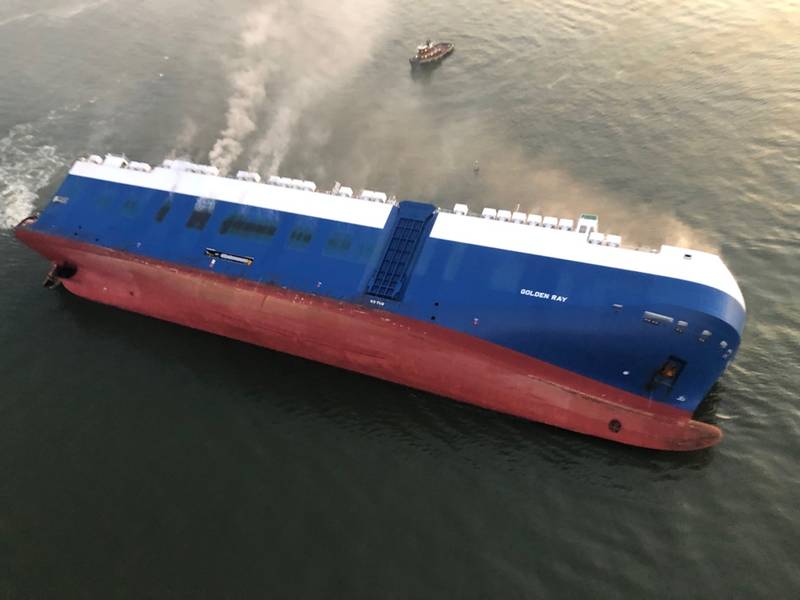 The 656-foot vehicle carrier Golden Ray capsized in St. Simons Sound, near Brunswick, Ga., in September 2019. All 23 crew and one pilot on board were rescued safely. (Photo: U.S. Coast Guard)