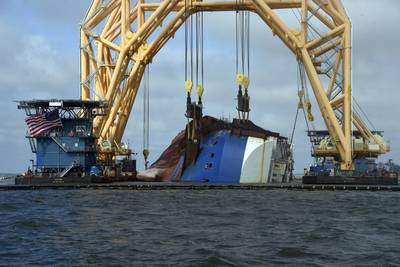 The salvage team working to cut and lift sections of the capsized car carrier Golden Ray in Georgia's St. Simons Sound has suspended operations ahead of a tropical storm that made landfall in neighboring Florida on Thursday.

The specialized heavy lift crane vessel VB 10,000 has paused work partway through the first cut, which began Friday, and has been secured inside the environmental protection barrier in advance of the approaching storm Eta, downgraded from a hurricane on Wednesday. Sections of floating boom vulnerable to severe weather have been removed, St. Simons Sound Incident Unified Command said.

Meanwhile, all response personnel and assets will remain in the area to resume operations when it is safe to do so, officials said, adding that the wreck remains stable and environmental monitoring efforts will continue.

The pause is the latest in string of setbacks for one of the most complex salvage projects in U.S. history. Teams have already encountered delays relating to difficult environmental conditions, a COVID-19 outbreak among crew, mooring system adjustments for the VB 10,000 and a broken cutting chain.

The ship will be dismantled in place and removed in sections. Salvors have installed 16 lifting lugs on the wreck to provide connection points for the U.S.-flagged VB 10,000, which has two 255-foot tall gantries that will use lengths of chain to cut the RoRo vessel into eight pieces and lift them onto barges for transportation to Gibson, La. for recycling. Sections containing cars will be unloaded in a drydock near the wreck site prior to being transported to Louisiana.