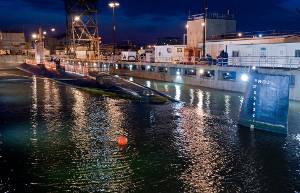 Northrop Grumman Corporation (NYSE:NOC) has been awarded a fixed price contract valued at $25m from the U.S. Navy for the preparation and completion of a dry dock continuous maintenance availability of USS Albany (SSN 753).

The company's Shipbuilding sector in Newport News is the prime contractor and will provide advance planning, design, engineering, procurement, ship-checks, fabrication and preliminary shipyard work as well as all necessary alterations, repairs, maintenance, modernization, testing and routine work required to return the submarine to the fleet. Work is expected to be completed by the end of July.
"The team of shipbuilders working on USS Albany is among the most skilled submarine repair craftsmen and craftswomen in the industry. They are dedicated to the success of this project and take pride in the craftsmanship and quality of their work," said Becky Stewart, vice president, submarine programs and fleet support at Northrop Grumman Shipbuilding. "We're prepared to quickly repair and return USS Albanyto the fleet."
Newport News is one of only two U.S. shipyards capable of building nuclear-powered submarines and since the early 1990s, has completed over 200 ship repair projects for the U.S. government, U.S.-flag commercial and foreign-flag commercial ships, ranging from paint repair to complete hull and machinery renovation.
USS Albany is the 43rd nuclear-powered fast-attack submarine of the Los Angeles class. The submarine was built by the Newport News shipyard and delivered to the Navy in 1990. USS Albany was Newport News' last submarine to slide down the incline of a wooden shipway during its christening on June 13, 1987.