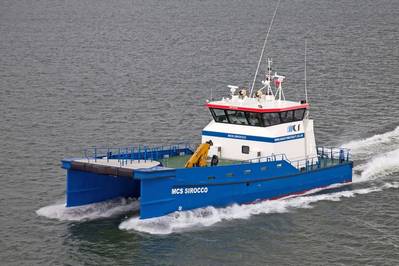 With more than 30 years of experience, the Scottish firm operates a 16-strong fleet of tugs and workboats internationally and already has several Damen vessels including Multi Cats, Shoalbusters and Dredge Helpers. MCS has been active in the offshore wind market for many years but decided to enter the crew transfer market in 2011.

The company’s first Twin Axe FCS 2610, MCS Sirocco was delivered in April this year and the second, MCS Pampero is awaiting a heavy lift carrier in Singapore and is due to arrive in Rotterdam before the end of the year.

The Twin Axe design is a further development of Damen’s pioneering and highly successful Sea Axe concept. This unique hull form provides excellent seakeeping behaviour and means that the vessel can travel at full speed (26 knots), while still providing a safe and comfortable ride for the crew.  The vessel can easily handle 2.5 m significant wave heights, without losing any performance and extensive tests have proven that the vessel reduces bow slamming entirely under certain conditions.

Offshore Wind standard
Introduced to the market in June 2011, the Damen Twin Axe Fast Crew Supplier 2610 is already establishing itself as “the industry standard” in the offshore wind industry when it comes to a number of maintenance tasks. Damen was delighted when a major wind turbine manufacturer recently put out a tender requiring that companies deploy Twin Axe vessels when handling its turbines. Damen is the only manufacturer of this type of catamaran, which was developed in close cooperation with the Delft University of Technology and other scientific research institutes.

Although the vessel has been eagerly adopted by the offshore wind industry, the vessel is suitable in multiple roles and provides a very stable platform for diving support for instance. It can easily be converted back into a basic crew supplier overnight.