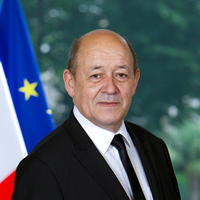 Foreign Minister Jean-Yves Le Drian said France was working with European capitals to improve maritime security in the Persian Gulf but stopped short of backing Britain's call for a naval mission to ensure safe shipping in the region.Jean-Yves Le Drian on Tuesday told lawmakers a de-escalation of tensions was needed several days after Iran seized a British-flagged tanker in the Strait of Hormuz in what London said was an act of "state piracy"."This is why we are setting up a European initiative…

The French government is in favour of Italian shipbuilder Fincantieri's acquisition of rival Chantiers de l'Atlantique, foreign minister Jean-Yves Le Drian told the newspaper Corriere della Sera in an interview."It's a good deal ... As far as the French government is concerned, we're in favour of this accord," Le Drian said.(Reporting by Valentina Za, editing by Larry King)

The death of Jacques R. Saadé, Founding President of the CMA CGM Group, roused an emotional response within the Group, in the entire maritime transportation industry and beyond. An exceptional tribute was paid to him on Friday, June 29, during his funeral. Jacques R. Saadé dedicated his life to CMA CGM. All the Group’s employees based in Marseilles were invited to attend the religious ceremony celebrated at La Major Cathedral. Attendees included Jean-Yves Le Drian, Minister for Europe and Foreign Affairs, Mrs. 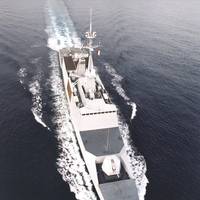 On May 2, 2017, the French Directorate-General for Armaments (DGA) awarded a contract to renovate three of the five La Fayette-class Frigates (FLF) currently in service with the French Navy to DCNS. Nathalie Smirnov, Head of Services at DCNS, declared, “DCNS thanks the Direction Générale de l'Armement (DGA) for its confidence and welcomes this notification related to the platform and combat system modernization of the La Fayette class frigates. These operations are major and have never been realized so far on this kind of frigate. 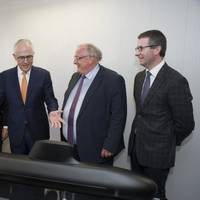 DCNS Australia celebrated the founding of its Australian headquarters in Keswick, Adelaide, which will be dedicated to delivering the Future Submarine Program. The ceremony was attended by Malcolm Turnbull, Prime Minister of Australia, Minister for Defense Industry, Christopher Pyne MP, Jean-Yves Le Drian, French Minister for Defense and a number of parliamentarians and defense sector figures. “This is an important initial milestone in DCNS’ decades long commitment to the design and construction of 12 regionally superior submarines in Adelaide…

The Minister for Defence, Senator the Hon Marise Payne, and her French counterpart, Minister Jean-Yves Le Drian, today agreed to strengthen the Australia-France defence relationship by establishing formal annual Australia-France Defence Ministers meetings. Minister Payne said Australia and France have a close and long-standing Defence relationship, based on shared interests in contributing to the rules-based global order and strong cooperation in the Pacific. “Building on these links…

Countries must be free to pass through the South China Sea, the European Commission said on Wednesday, in its first diplomatic admonishment of Beijing after Chinese jets intercepted a U.S. military plane over the contested waters last month. The Commission avoided directly criticising Beijing, a major trade partner, but warned in a new policy document that it opposed "unilateral actions that could alter the status quo and increase tension", in a sign of concern at China's construction and militarisation of islands in the South China Sea. "The EU wants to see freedom of navigation and over flight upheld in the East and South China Seas," the EU executive said in its document, which is aimed at framing the bloc's China policy over the next five years.

France aims to push European Union countries to coordinate navy patrols in the disputed South China Sea, French defence minister Jean-Yves Le Drian said at the Shangri-La Asian defence forum in Singapore on Sunday, according to Bloomberg. A senior French official travelling with the minister said France will discuss plans with EU partners in coming weeks, with a focus on guaranteeing that EU navies regularly crisscross the waters. "Could we not have the European navies coordinate in order to ensure a regular visible presence in maritime areas in Asia?

Ousting of Japan ally PM Abbott opened door to rivals; Tokyo slow to respond to new competitive process. In 2014, a blossoming friendship between Australian Prime Minister Tony Abbott and his Japanese counterpart Shinzo Abe looked to have all but sewn up a $40 billion submarine deal. Then French naval contractor DCNS hatched a bold and seemingly hopeless plan to gatecrash the party. Almost 18 months later, France this week secured a remarkable come-from-behind victory on one of the world's most lucrative defense deals. The result: Tokyo's dream of fast-tracking a revival of its arms export industry is left in disarray. Interviews with more than a dozen Japanese…

France has expressed its willingness to help Libya’s new unity government with maritime security as the fledgling administration seeks to assert its authority over the chaos-wracked country, reports AFP. "We must wait for [Libyan] Prime Minister [Fayez Sarraj] to tell us what security measures should be taken and what he intends to get from the international community to ensure the maritime security of Libya," French Defense Minister Jean-Yves Le Drian said. On Monday, it was agreed at a meeting of US…

France to Pay Russia Under €1.2 bln Over Warships

The total cost to France of reimbursing Russia for cancelling two warship contracts will be less than 1.2 billion euros, French Defence Minister Jean-Yves Le Drian said on Thursday. Le Drian said on radio RTL the initial price for the two Mistral helicopter carrier warships had been 1.2 billion euros, but France will have to pay less than that because the ships were not been finished and the contract was suspended. "Talks between President Putin and President Francois Hollande have concluded yesterday. There is no further dispute on the matter," he said. He added that the discussions had been held in an amiable way and that there were no further penalties to pay over the contract, which was cancelled because of Russia's role in the Ukraine conflict.

France's Charles de Gaulle aircraft carrier has started military operations against Islamic State in Iraq, a French army source said on Monday. "The carrier and its naval group has officially started missions as part of its Chammal operation in Iraq," the source told Reuters in a reference to the name of the mission. A second source said the carrier would be engaged for several weeks. Le Figaro newspaper, which is accompanying Defence Minister Jean-Yves Le Drian ahead of an official announcement he is set to make on the carrier on Monday, said the first reconnaissance and possible air strikes in Iraq took place in the morning. France was the first country to join the U.S.-led coalition in air strikes in Iraq against Islamic State insurgents…