Liebherr Container Cranes, manufacturer in the Republic of Ireland, and Montreal Gateway Terminals Partnership (MGT) have signed a contract for the supply of four ship to shore (STS) container cranes to the Cast Container Terminal in Montreal, Canada.The cranes will be delivered in 2021, said a press note from the manufacturers of ship to shore cranes, rail mounted gantry cranes and rubber tyre gantry cranes.The cranes will easily handle the largest container vessels currently…

For the first time, the ports of Antwerp, Barcelona, Hamburg, Los Angeles, Montreal and Rotterdam come together to showcase their most advanced digital transformation and sustainability projects at their dedicated ‘Smart Ports’ exhibitThe 'Smart Ports. Piers of the Future' event brought together six of the world's largest ports and has turned Barcelona into the world capital of port innovation.At the Smart City Expo World Congress, held from 19 to 21 November at the Fira de Barcelona events center on Gran Via… 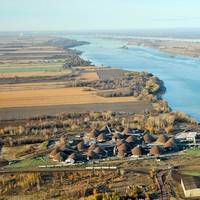 The Canada Infrastructure Bank (CIB) announced that it will work with the Montreal Port Authority (MPA) to advance the project development of a new container terminal in Contrecoeur, where the port plans to expand its activities.The work could lead to an investment in the South Shore project, potentially via a form of equity or debt financing, said Pierre Lavallée, the bank’s chief executive officer.The Memorandum of Understanding confirms that CIB and MPA will work on the financial structuring of the proposed terminal. 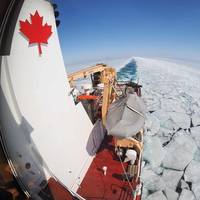 The Great Lakes-St. Lawrence shipping industry is calling for at least five new icebreakers to be part of the federal government’s recent announcement of $15.7 billion for Canadian Coast Guard fleet renewal.Chamber of Marine Commerce President Bruce Burrows will be in attendance as the Coast Guard dedicates the Captain Molly Kool into service at its home port of St. John’s, Newfoundland and Labrador. The Captain Molly Kool was recently retrofitted to provide services along the East Coast.

Maersk Line, the world's largest shipping company, announced the expansion of its product portfolio between Europe's Mediterranean region and Canada to cater for the growing demands of importers and exporters on both sides of the Atlantic. The exclusive, fully Maersk Line-operated weekly service will be a five-vessel rotation stopping in Salerno and La Spezia (Italy), Fos-sur-Mer (France), Algeciras (Spain), Montreal and Halifax (Canada), and Valencia (Spain). Other Mediterranean…

On a trade mission to India, the Montreal Port Authority (MPA) has signed a Cooperative Agreement with Mundra Port, Gujarat State, north of Mumbai. This agreement aims to develop cooperation in marketing and business development while sharing information on marine operations and industry best practices. Mundra Port is India’s largest commercial port. A diversified port, it handles liquid and dry bulk and more than three million TEUs in annual container traffic. It is operated by Adani Ports and Special Economic Zone Limited (APSEZ).

Ottawa Express First Ship in Port of Montreal in 2018

The President and CEO of the MPA, Sylvie Vachon, together with the Minister for Maritime Affairs, Jean D’Amour, the Mayor of Montreal, Denis Coderre, and the Mayor of the Borough of Mercier–Hochelaga-Maisonneuve, Réal Ménard, today announced the signing of an agreement for the establishment of an industrial port zone (IP Zone) in Montreal. The members of the local committee mandated to establish the Montreal Zone IP are: the City of Montreal, the City of Montreal East, the Montreal Metropolitan Community, CargoM and the relevant departments and agencies.

First into Montreal gets Gold-Headed Cane

The President and CEO of the Montreal Port Authority (MPA), M me Sylvie Vachon, today presented the Gold-Headed Cane to the shipping agent Denis Blondeau SMK Tanker Agency for the captain Danel Ju. Mr. Danel Ju of South Korean nationality and is the commander of Chem Sirius , going vessel to enter the Port of Montreal without a stopover in 2017. The Chem Sirius left the port of Antwerp, Belgium, on 19 December. He spent the limits of the Port of Montreal on 1 st January to March h 16. 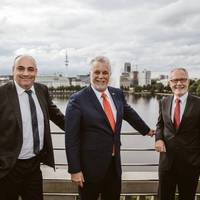 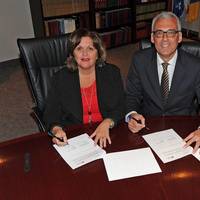 Yesterday during a joint trade mission in Montreal, the port authorities of Montreal and Antwerp, Belgium renewed their cooperative agreement. The first agreement, signed in March 2013, resulted in four trade missions to Montreal and Antwerp during which extensive business contacts were developed. These meetings also enabled productive exchanges of information on issues such as sustainable development, land use, the Comprehensive Economic and Trade Agreement (CETA) between Canada and the European Union, global trends in the markets, and the development of port logistics zones. 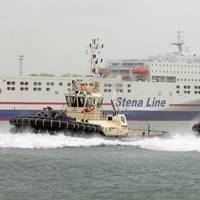 Denmark's Svitzer, the world's biggest tugboat operator, said on Monday it has established a harbour towage service in the Port of Montreal providing shipdocking, escort and ice-breaking services. Svitzer, a unit in shipping and oil group A.P. Moller-Maersk , said in a statement it has mobilized two ice-class tugs to the port and a third tug will arrive in mid-April. "Canada is one of our key growth markets in the Americas," the company added. Svitzer reshuffled its organisation in August in a bet to speed up growth in the Middle East, Africa and Asia. Reporting by Ole Mikkelsen 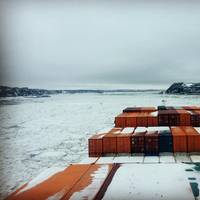 The Canadian city of Montreal numbers among North America’s most important hubs for maritime cargo. Hapag-Lloyd’s ships help keep the waterways ice-free in winter. Vessels sailing through the Gulf of Saint Lawrence and along the Saint Lawrence River can get deep into the North American continent. The stretch leading to Montreal measures nearly 700 nautical miles and usually takes a container ship about 44 hours to complete. During the often harsh winters, ice, freezing sea spray and low temperatures severely test ships and their crews. Of course, icebreakers keep the waterways free year-round.

Port Metro Vancouver today released its 2015 year-end statistics. Overall volume remained steady at 138 million tonnes of cargo as sectors experiencing declines were offset by others that hit new records. This is the port’s third consecutive year of strong cargo volumes, with new records set in the container, potash, and grain and agri-product sectors. Cargo shipped in containers continued to show substantial growth due to increased trade with Asia, with a five per cent jump in units (known as twenty-foot-equivalent units or TEUs) for a new record of 3.1 million TEUs. Grain and agri-product exports increased by eight per cent over 2014 to 25.1 million metric tonnes, and potash exports were 8.7 million metric tonnes, up 15.6 per cent from the prior year.

The Port of Montreal is expecting a banner year of tourism. The emergence of spring marks the beginning of a brand new cruise season, says Tourisme Montréal. With no fewer than 19 ships expected, including 5 new ones (the Oceania Marina, Oceania Insignia, AIDA Diva, Saga Sapphire, and M/V Saint-Laurent Prestige), it’s going to be a great cruise season at the Port of Montréal. The M/V Saint-Laurent Prestige, which chose Montréal as its home port for the 2015 season, will be the first vessel of the year to take on passengers and set sail from Montréal on May 12. 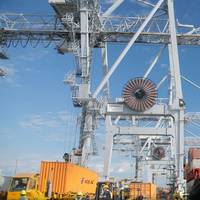 Ottawa government has announced a multimillion-dollar investment for the Port of Montreal, meant to facilitate exports following a new trade deal with Europe. The Port will receive a $132-million makeover in anticipation of an increase in exports. Ottawa will contribute $43.7 million to the project. The remainder of the money will come from the port itself. Federal Infrastructure Minister Denis Lebel said the expansion project was "directly linked" to the new trade deal with Europe. 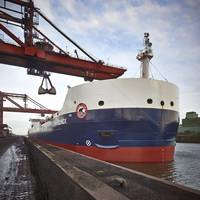 A new study released today reveals that $7 billion is being spent on asset renewal and infrastructure improvements in the bi-national Great Lakes-St. Lawrence shipping system. The investment survey, compiled by maritime trade consultants, Martin Associates, tallies US$ 6.9 billion in capital spending on ships, ports and terminals and waterway infrastructure in the Great Lakes and St. Lawrence waterway. Of that total, $4.7 billion has been invested in the navigation system from 2009-2013 and another $2.2 billion is committed to improvements from 2014-2018.

The Canadian Coast Guard (CCG) authorizes the passage of vessels up to 44 metres wide in the Quebec-Montreal section of the St. Lawrence navigation channel. The previous authorized width was 32.1 metres without restrictions. The CCG has made the provisions following a study commissioned by the Montreal Port Authority (MPA) and conducted jointly with Transport Canada, the CCG, the Laurentian Pilotage Authority and the Corporation of Central St. Lawrence Pilots. “I would like to thank everyone who has collaborated on this project,” said MPA President and CEO Sylvie Vachon. Specifically, the new provisions will make it possible for all post-Panamax vessels, including 6,000-TEU (twenty-foot equivalent unit) container ships, to reach Montreal.

A majority of seafarers have no internet access available to them on board: IAPH recognizes Montreal for providing free WiFi access in the port. According to a 2013 research of SIRC (Seafarers accommodation on contemporary cargo ships) cited by ITF “very few seafarers have access to internet. 12% reported free and unlimited internet access. The majority(61%) reported that they have no internet access available to them on board at all. The remainder(27%) experience either time restriction or charges or some other kind of restricted access”. However, a handful of ports are able to offer a free internet connection to seafarers. One of these is the Port of Montreal… 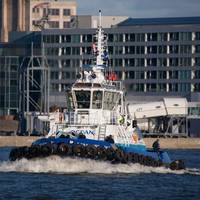 Océan Remorquage Montréal Inc. tugboat 'Ocean Pierre Julien' christened at the Ocean Industries shipyard, Isle-aux-Coudres. The construction of this tug cost $ 10.6 million, and the vessel is the 3rd of the Intrépide series to be built at Ocean Industries. The traditional christening ceremony was held in the presence of the President and First Vice- President and General Manager of Ocean, Messrs. Gordon Bain and Jacques Tanguay, of Ms. Sylvie Vachon, President and CEO of the Montreal Port Authority, of Mr.

The Maritime Employers Association & the Longshoremen's Union Local 375 sign a new 6 year collective agreement. The Maritime Employers Association and Local 375 CUPE Longshoremen's have just inked a new collective agreement which will allow the Port of Montreal to continue its operations while remaining competitive and ensuring its growth. The Memorandum of Agreement, signed on January 4, 2013 by both parties, has now been presented to union members attending the union meeting. The new collective is valid for a 6 year period and the negotiations focused mainly on both parties' priorities. The M.E.A.'s concerns were workload flexibility as well as discussions of a Job Security program better suited to current reality. The Baie St. Paul, Canada Steamship Lines’ first of four new Trillium Class self-unloading Lakers – and  the most technologically advanced ship to enter the Great Lakes-St. Lawrence Seaway bulk shipping market – set sail today on her maiden voyage from Chengxi shipyard in Jiangyin, China to Montreal, Quebec. “Every first voyage of a new ship is an exciting event, but with the Baie St. Paul, the occasion is truly historic as CSL prepares to welcome the most modern vessel in the Great Lakes,” remarked Louis Martel, President of Canada Steamship Lines.