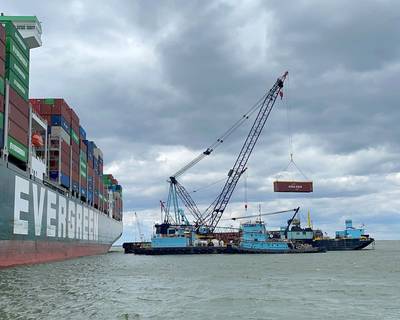 Salvors on Saturday started removing containers from the grounded containership Ever Forward in an effort to reduce ground force ahead of the next refloat attempt.

The lightering operation follows several failed attempts to dredge around and tow out the 1,095-foot vessel, which has been stuck in the mud outside of the Craighill Channel in the Chesapeake Bay since March 13.

Crane barges will remove a portion of the containers from both the port and starboard sides of the the 12,000 TEU vessel. The boxes will then be shuttled back to and offloaded at their original onboarding facility, Seagrit Marine Terminal in Baltimore. The Hong Kong-registered containership is carrying 4,964 containers of general dry goods, according to the Coast Guard, who said lifting work will only take place during daylight hours for safety reasons.

Once the desired number of containers are removed, tugs will try again to refloat the vessel.

The Coast guard said it expects the container removal operation to last about two weeks, though the timeline could be impacted by weather conditions and other variables.

According to Doyle, 43 containers have been delivered to the Seagirt terminal so far, with two more barges taking on 20-23 containers apiece Monday afternoon.

The Coast Guard said the response team continues to monitor the vessel for signs of pollution. None has been reported to date.

A 500-yard safety zone around the ship will continue for the duration of the operation, and the adjacent shipping channel will remain unaffected, the Coast Guard said.

The ship's Taiwanese owner Evergreen Marine has declared general average amid a salvage operation that has grown costlier and more complex than initially anticipated.