The consortium consisting of Fincantieri, through its subsidiary Fincantieri Marinette Marine (FMM), and Lockheed Martin Corporation has delivered the future littoral combat ship USS St. Louis, LCS 19, to the Navy.St. Louis is the 10th Freedom-class ship, and the 19th littoral combat ship of 34 planned by the Navy. Independence-class LCS vessels are also underway.The Fincantieri and Lockheed Martin team is currently in full-rate production and has delivered ten ships to the U.S. Navy to date. 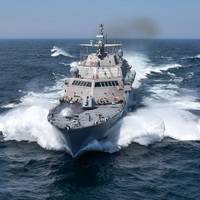 A Lockheed Martin-led team has secured a multibillion dollar order from the U.S. Navy to build four Multi-Mission Surface Combatants ships for the Kingdom of Saudi Arabia, as part of the U.S.’s Foreign Military Sales program.Fincantieri Marinette Marine (FMM), who has been working with Lockheed Martin, naval architect Gibbs & Cox and more than 800 suppliers in 42 states for the US Navy’s Littoral Combat Ship (LCS) program, said it will build the ships at its Marinette yard in Wisconsin. 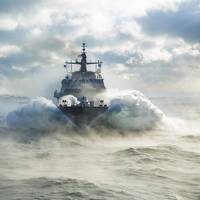 Littoral Combat Ship (LCS) 19, the future USS St. Louis, has completed acceptance trials in Lake Michigan and will now undergo final outfitting and fine-tuning before delivery to the US Navy early next year.Christened and launched on December 15, 2018, LCS 19 was built by Marinette Marine in Marinette, Wis. The vessel is the seventh ship in naval service named after St. Louis, Mo. and the 10th Freedom-variant LCS designed and built by the Lockheed Martin-led industry team."The LCS fleet is growing in numbers and capability… 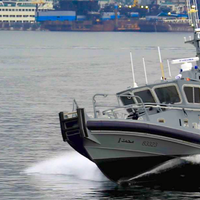 Fincantieri Marinette Marine (FMM) and Vigor (Team RB-M) has announced the delivery of the first three on a six vessel RB-M contract to the US Coast Guard. The boats are part of a Foreign Military Sale to The Kingdom of Bahrain’s Coast Guard. Hulls four through six are expected to ship in 2020. A total of 182 RB-Ms have been built by Team RB-M.FMM was the prime contractor and program manager. Vigor fabricated the vessels at its Seattle, Washington facility using high temp resistant aluminum. 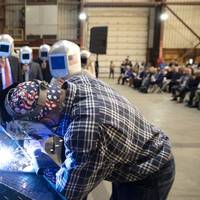 Lockheed Martin and Fincantieri Marinette Marine have laid the keel of a new littoral combat ship to commence the vessel’s construction.The future USS Nantucket, or LCS 27, underwent a keel-laying ceremony in Wisconsin where Polly Spencer, the ship’s sponsor, had her initials welded on the vessel’s keel plate, Lockheed said.As part of a ship-building tradition dating back centuries, a shipyard worker welded the initials of Polly Spencer, USS Nantucket ship sponsor and wife of U.S. Secretary of the Navy Richard Spencer, into the ship's keel plate. 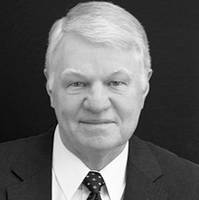 Former Chief of Naval Operations Adm. Gary Roughead was elected as the chairman of the board of directors of Fincantieri Marinette Marine Corporation July 10.Roughead was the 29th Chief of Naval Operations from 2007 - 2011, after holding six operational commands. He is one of only two officers in the history of the Navy to have commanded both the U.S. Atlantic and Pacific Fleets.Roughead served in several key positions aside from his sea duties, most notably as the commandant of the U.S. 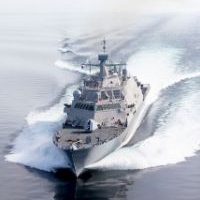 The Port of Indiana-Burns Harbor will host Indiana’s first U.S. Navy vessel commissioning ceremony when it commissions the USS Indianapolis littoral combat ship on Saturday, Oct. 26 at its facility on Lake Michigan.The commissioning of USS Indianapolis will mark the fourth time a U.S. Navy vessel will bear the name of Indiana’s capital city. The name has a rich heritage, dating back to World War I. The most notable vessel, USS Indianapolis (CA 35), was torpedoed by a Japanese submarine in 1945 in the closing days of World War II. Only 317 of the 1,196 men on board survived. 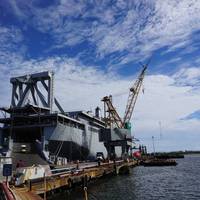 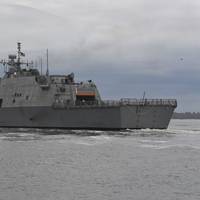 The U.S. Navy has awarded a shipbuilding contract to a consortium consisting of Fincantieri, through its subsidiary Fincantieri Marinette Marine (FMM), and Lockheed Martin Corporation, to build an additional vessel as part of its Littoral Combat Ship (LCS) program.LCS 31 will be the 16th Freedom-variant LCS, one of the U.S. Navy’s main shipbuilding programs. The Fincantieri and Lockheed Martin team is in full-rate production of the Freedom-variant, and has delivered seven ships to the U.S. Navy to date.

Retired Vice Adm. Richard Hunt will assume the position of president of the Surface Navy Association (SNA) at the association’s annual symposium in January. Hunt succeeds retired Vice Adm. Barry McCullough, who has been president since 2013.Hunt is a graduate of the University of Wisconsin-Madison and was commissioned in February 1976 through the Officer Candidate School program in Newport, R.I. He attended Naval Post Graduate School, receiving a Master of Science in Telecommunications Systems Management in March 1988.He has served in USS Sampson (DDG 10), USS Underwood (FFG 36) and USS Roark (FF 1053), and has commanded USS Crommelin (FFG 37) and USS Philippine Sea (CG 58).

US Navy Adds Sioux City and Wichita to its Fleet 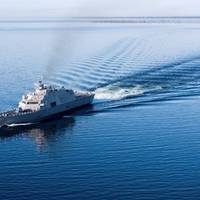 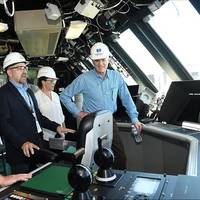 Secretary of the Navy, The Honorable Richard V. Spencer, visited the Fincantieri Marinette Marine shipyard, the home of Freedom-Variant Littoral Combat Ship production. The Lockheed Martin-led Team Freedom has delivered five ships to the U.S. Navy to date, with two more scheduled for delivery this year. "It is truly great to see what is being produced up here with the American worker," Secretary Spencer said during a shipyard tour. "We're producing a ship that based on price is exceptional. Spencer visited to view the modernized production line and tour LCS 13, the future USS WICHITA. 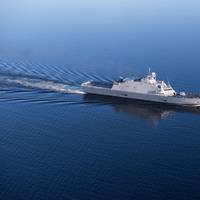 One of the U.S. Navy’s newest Freedom variant littoral combat ships (LCS) completed its final significant milestone before its scheduled summer delivery with the conclusion of acceptance trials at the end of May.On May 25, the future USS Sioux City (LCS 11) wrapped up a series of graded in-port and underway demonstrations on the Great Lakes for the Navy's Board of Inspection and Survey. During the trial, the Navy conducted comprehensive tests intended to demonstrate the performance of the propulsion plant… 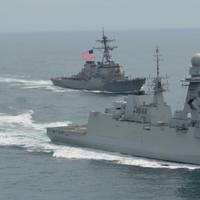 The ITS Alpino, a Fincantieri-built frigate sailing under the Italian flag, made landfall in Norfolk. The ITS Alpino, a FREMM-class frigate, is a model of the ship the U.S. Navy is considering for the FFG(X) future frigate program. FREMM frigates are the only ships in the competition that have been proven in combat, having helped to destroy a Syrian chemical weapons facility in April. "The ITS Alpino demonstrates the proven versatility and capability of the FREMM class frigate," said Vice Admiral Richard Hunt (Ret.), Fincantieri Marinette Marine's Chief Strategy Officer.

Fincantieri to Adapt FREMM Frigate for US Navy 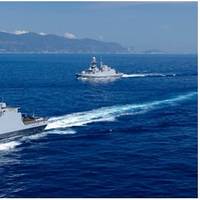 Shipbuilder Fincantieri Marine Group has announced further details on its plans to adapt its FREMM frigate, already in service for the Italian Navy since 2012, to design the U.S. Navy’s new guided-missile frigate, FFG(X). Fincantieri said it will lead an industry team, including Gibbs & Cox and Trident Maritime Systems, to design and build the ships at its U.S. shipyards, including Fincantieri Marinette Marine (FMM) in Marinette, Wisc. The FFG(X) design is based on FREMM, a multi-mission ship capable of conducting antisurface… 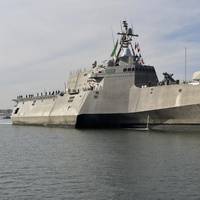 The U.S. Navy’s next two Littoral Combat Ships will be named USS Nantucket (LCS 27) and USS Savannah (LCS 28), announced Secretary of the Navy Richard V. Spencer. The future USS Nantucket (LCS 27), a Freedom-variant Littoral Combat Ship to be built by Fincantieri Marinette Marine in Marinette, Wis., will be the third commissioned U.S. Navy ship to honor the maritime history of Nantucket. The future USS Savannah (LCS 28), an Independence-variant Littoral Combat Ship to be built by Austal USA in Mobile, Ala., is the sixth ship to bear the name of Georgia’s oldest city.

The Navy awarded five (5) Conceptual Design (CD) contracts for the Guided Missile Frigate (FFG(X)). The contracts based on these requirements will facilitate maturing multiple designs during the 16 months of the Conceptual Design phase, and will allow the Navy to better understand the cost and capability drivers across the various design options. Furthermore, this will inform the final specifications for a full and open competition with a single source award in FY20 for Detail Design and Construction (DD&C) of the FFG(X). The entrance criteria for the Conceptual Design phase is that offerors must have a parent design that has been demonstrated at sea and must already be paired with a domestic shipyard for potential production, which will reduce the necessary development timeline. 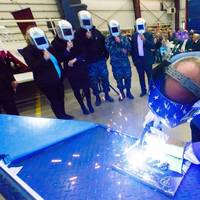 The Lockheed Martin (LMT)-led industry team officially laid the keel for the U.S. Navy's 21st Littoral Combat Ship (LCS), the future USS Minneapolis-Saint Paul, in a ceremony held at Fincantieri Marinette Marine in Marinette, Wisc. Ship sponsor Jodi Greene authenticated the keel by welding her initials onto a steel plate that will be placed in the hull of the ship. "It is a tremendous honor to serve as the sponsor of the future USS Minneapolis-Saint Paul," Greene said. "I look forward to supporting the ship and its crew throughout the building process and the life of the ship.

US Navy: 355-Ship Fleet is the Mandate, Funding It is Fuzzy 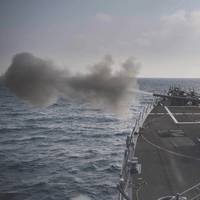 As Congress wrestles with the budget, there is at least a bipartisan consensus that defense spending should grow, and that includes growing the Navy’s fleet. The current goal is 355 ships, an admirable goal, but an objective that faces many cost hurdles. The surface fleet (which excludes submarines and aircraft carriers) needs to grow in capability and capacity. The numbers of ships being procured or envisions would increase as the total n umber of ships increases, but the number in this story represents current program status. 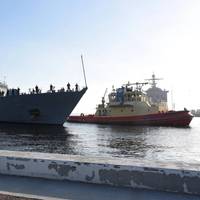 The U.S. Navy’s newest Freedom-variant littoral combat ship has finally reached its homeport in Mayport, Fla. after a winter trapped in the icy north. Built at the Marinette Marine Corporation shipyard in Marinette, Wisc., the USS Little Rock (LCS 9) was scheduled to sail for its Florida homeport following a December 2017 commissioning ceremony in Buffalo, N.Y., but worse-than-expected ice conditions in the St. Lawrence Seaway delayed the homeward voyage and forced the ship to wait out the rest of the winter in Montreal. 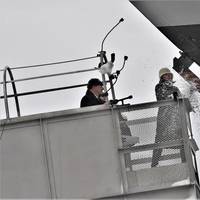 The Lockheed Martin-led industry team hosted the christening ceremony for the 17th Littoral Combat Ship (LCS) at the Fincantieri Marinette Marine shipyard on Saturday. Ship sponsor Jill Donnelly christened LCS 17, the future USS Indianapolis , in Navy tradition by breaking a champagne bottle across the ship's bow. "As a native Hoosier and the daughter of two World War II veterans, there is no greater honor than to serve as the sponsor of the future USS Indianapolis ," Donnelly said.