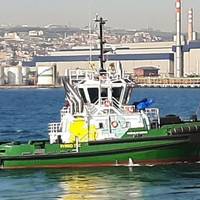 The first Advanced Variable Drive (AVDTM) tugboat with its unique application of hydro-mechanical hybrid propulsion in the marine segment, Bogacay XXXVIII provides towage services across a broad range of customers in Izmit Bay. Since her introduction into the Sanmar operated fleet on February 25, 2020, following its commissioning ceremony in at Sanmar’s Tuzla Shipyard, she has performed alongside her diesel mechanical sisters in the Izmit Bay fleet.A primary advantage of the CAT… 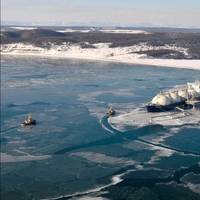 Svitzer, the towage operator that is part of Maersk, announced a 10-year extension of its marine service contract with Sakhalin Energy Investment Company Ltd., a consortium set up to develop and manage the Sakhalin-II project, aimed at producing and exporting oil and liquefied gas.Svitzer has been providing towage services to the Sakhalin-II project since 2007, and the extension comes into effect in November 2022 to support the mooring of more than 1,800 gas carriers with a vessel fleet of four Robert Allen ice-breaking tugs and two mooring boats. 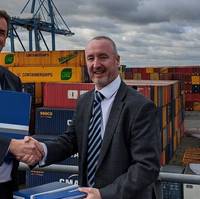 Damen Shipyards Group has signed a contract with Forth Ports Limited for an ASD Tug 2312. The new vessel will operate as part of the Forth Estuary Towage operation, conducting towage work at various Forth Ports locations as well as providing towage services to other external customers in Scotland.Forth Ports has a range of existing operations in the Forth and Tay Estuaries that will benefit from the acquisition of this new vessel, however, the new vessel will also provide opportunities to service new emerging markets such as decommissioning and offshore wind.

Rimorchiatori Riuniti has has acquired an azimuth tractor tug from Sanmar Shipyards to boost its operations in the port of Genoa, ItalyThe 25-m tug was upgraded, renamed Italia and deployed to provide towage services in Genoa.Sanmar had delivered a RAmparts 2400SX Class ASD Tug to the Genoese group back in 2014 and that tug has been re-named as Turchia which is currently giving towage service in the port of Genoa.Italia is an azimuth tractor tug, TRAktor-Z 2500SX designed by the…

Chilean logistics company SAAM has struck a deal to buy Intertug Investment Holding, a towage services company with operations in Colombia, Mexico and Honduras.SAAM will spend $54.5 million for 70% of Intertug, based on an enterprise value of $98 million, and carry out the acquisition through a capital increase and a share purchase, it said in a stock market exchange announcement.Intertug's 25-vessel fleet logs more than 18,000 maneuvers a year, generating around US$44 million in towage service revenue annually.The partnership with Intertug allows us to enter Colombia… 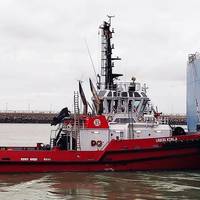 The provider of towage services Boluda Towage Europe said that it's tugboat ‘Union Koala’ was officially certified for compliance with the IMO Tier III standards. The converted tug returned to service during a ceremony at the ABC Tower in Zeebrugge, Belgium."Boluda Towage Europe has passed a new milestone: it is the first towage company in Europe to convert an existing tugboat, complying with the IMO Tier III standards. The company embarked on this project together with supplier…

Rolls-Royce has signed a 10-year service agreement with the global towage and marine services operator  Svitzer covering spare parts deliveries in six countries for a fleet of 17 tugs powered by MTU-brand Series 4000 engines.The agreement – named Global Frame Value Care Agreement (VCA) – covers spare parts deliveries in 6 countries.In VCA, the cost of maintenance services is being tied to the engine up-time. This is the first maintenance contract of its kind to be signed by Svitzer.

More than 30 vessels carrying over 14,000 passengers in total chose to call in at Falmouth Cruise Port, Australia as part of their 2019 programme and even more have already booked for next year.The cruise ship operations are managed by FDEC (Falmouth Docks and Engineering Company) which is part of the A&P Group. FDEC is a statutory harbour authority, responsible for the area of water immediately surrounding Falmouth Docks. FDEC offers a range of services including cruise ship operations… 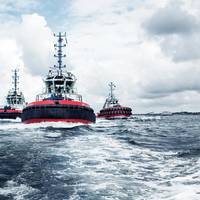 Perth-based Harbor towage operator, Westug Pty Ltd (Westug) has announced their successful start with the OptiPort AI-assisted Dispatch system in its new Port Hedland operation to ensure long-term, efficient and sustainable towage services in the port on behalf of KOTUG for Fortescue Metals Group (Fortescue). The announcement was made alongside the official start of Westug’s towage operations in the world’s leading and largest dry bulk export port with an annual export volume of over 500 million tons of iron ore… 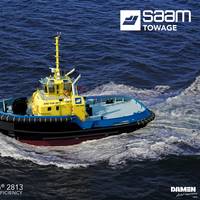 In August 2019 Damen Shipyards Group signed a contract with SAAM Towage for the delivery of an ASD Tug 2813 to SAAM Mexico for operations in the port of Veracruz. This order is the latest milestone in a business relationship spanning several decades and involving numerous vessels.Due to an existing relationship built on previous shared success, SAAM Towage approached Damen sales manager Ezequiel Najmias with a possible order. Ezequiel used the opportunity to invite SAAM Towage representatives to visit the Damen Song Cam Shipyard in Vietnam. 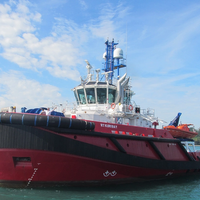 Successful trials of Inmarsat Fleet Xpress off Western Australia have persuaded global tug operator KOTUG International to select the high-speed broadband solution for this area of the Asia Pacific region.Following trials on board the 100-ton bollard pull tug Roebuck Bay, the towage service company has confirmed that the unique Fleet Xpress combination of Ka-band, continuously backed up by FleetBroadband, has significantly enhanced both the stability of communications and available…

Another Damen ASD Tug 2813 in Service 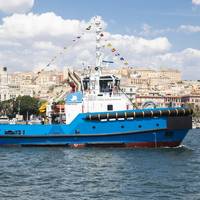 On 18 July 2019, Moby held a naming ceremony for their new Damen ASD Tug 2813, Vincenzino O. in Cagliari as part of the company’s plans to upgrade its fleet.Moby’s CEO Achille Onorato says: “We are very proud to welcome this new tug to our fleet. The vessel, which carries the name of my son, Vincenzino O., introduces the sixth generation of our family to the sea and is a clear demonstration of our commitment to the community of Sardinia. We have enjoyed an excellent cooperation…

AtoB@C Shipping, a ship operator and logistics company, said that it would start to offer port towage and related services in Port of Raahe, Finland in August 2019.A press release from the wholly-owned subsidiary of the Finnish dry bulk shipping company ESL Shipping said that it offers the services equally to all vessels. Port towage and related services shall be offered 24/7 all year round.“Our long term presence in Port of Raahe provides an excellent base for also offering of towage services. We know the Port, it’s partners and the needs of vessel calling here in Raahe”, says Regional Manager Ari Hurula.Recently the size of ships calling Raahe has been increasing. This together with variating wind conditions effect the required assistance service level. 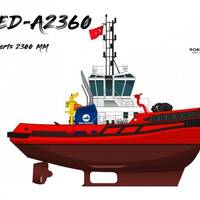 Turkish shipbuilder and tugboat operator Med Marine signed a contract for a MED-A2360 series tugboat with Saam Guatemala for its Puerto Quetzal operations.The vessel is a RAmparts 2300-MM tugboat, designed exclusively for Med Marine. She is named as Saam Itza and the delivery is set for June 2019.Med Marine built 6 units of the same design with 50 TBP some of which were recently sold; some are being operated in Med Marine’s own fleet.ASD type high-quality vessel is designed for harbour and terminal operations, and coastal towing.

The global towage operator Svitzer held a ceremony on the River Thames  to officially christened Svitzer Meridian as the latest - and tenth - vessel in its Port of London fleet.During a naming ceremony held on the River Thames with guests representing a variety of customers and partners – including vessel builder Sanmar – the 70 tonnes bollard pull Azimuth Tractor Drive (ATD) Svitzer Meridian was officially christened by representatives from multinational electricity and gas utility company National Grid Grain LNG…

SMIT Salvage has acquired two five-year marine salvage contracts to serve as the exclusive marine salvage and engineering support contractor for the Naval Sea Systems Command (NAVSEA), the division of the U.S. Navy responsible for engineering, building, buying and maintaining Navy ships and submarines.The Royal Boskalis Westminster N.V. subsidiary will provide the U.S. Navy with marine salvage, salvage-related towing, ocean engineering and towage services in the event of an emergency or incident in two of the three geographic zones in the world as defined by the U.S. Navy.SMIT Salvage held a contract for one zone covering the area between the Suez Canal and the international date line for a number of periods totaling more than 30 years, which it was able to renew. 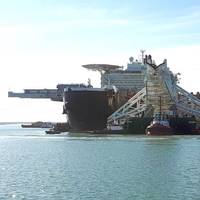 Allseas’ Pioneering Spirit, the largest construction vessel in the world, has arrived in the port of Rotterdam to prepare itself for upcoming topsides lift works.The preparations included the removal of the pipelaying stinger. When Pioneering Spirit is required for topsides lift work, the pipelaying stinger will be removed from the bow section of the vessel and stored on the purpose-built barge, Bumblebee.Kotug Smit Towage provided various towage services for the removal of the stinger.

Specialized Marine Services (SMS), a JV between the Ports Development Company (PDC), which is the private sector owner and developer of King Abdullah Port, and the National Port Services Company, delivered 1,460 maritime services  in 2016. It expects 30% increase expected by the end of 2017. SMS is the primary supplier of marine services, such as marine guidance, in King Abdullah Port. Its team includes highly qualified and skilled maritime guides with vast experience in dealing with the largest international vessels, most of which have visited the King Abdullah Port. 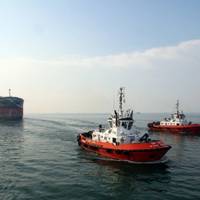 Summit Power International (SPI), Singapore, announced that its subsidiary, Summit LNG Terminal has awarded a 15-year contract to PSA Marine Bangladesh, a subsidiary of PSA Marine. Under the contract, PSA Marine Bangladesh will provide berthing, mooring, pilot and personnel transfer services to LNG ships calling at Summit LNG FSRU terminal, with its three escort tugboats, one fast crew boat and one offshore supply vessel. The award of this contract marks a significant milestone for PSA Marine and commencement of a long-term partnership with SPI. 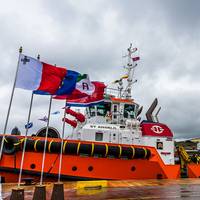 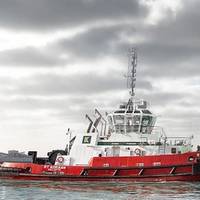 Greek-Euro Towage Maritime Company (GMC), a  joint venture company operated by Italian tug owners Rimorchiatori Mediterranei, Fratelli Neri and Rimorchiatori Laziali, is set to acquire 80% of the assets and operational interests in Zouros Group.Zouros retains the remaining 20% stake, with the two companies’ fleet of tugs to be brought together under their joint operational responsibility.Rimorchiatori Riuniti is an operating holding company active in the harbor, offshore and shipping sectors, controlled by private Genoese families long active in the maritime industry.Fratelli Neri, which provides harbor towage and related maritime services…